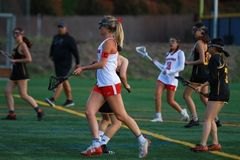 The Falcons are proud of their accomplishments after almost not having a season.

As the senior night game kicked off, the girls’ lacrosse team cheered for seniors Caroline Keogh, Casey Gilligan and Lauren Vandevort. Members of the boys’ lacrosse team also attended to show their support.

The team had a successful 17-0 win against Wilcox High School on April 27 for their senior night. This was the team’s fifth win, ultimately ending their season with a 5-7 league record.

Because of low signups and previous coach Marlo Lile stepping down from the head coach position to coach at a club team in Marin, the team initially faced the possibility of not having a season. However, Alyssa Dunlap, who played Division I lacrosse at Vanderbilt University, was hired as head coach, with Lile continuing to help out at Tuesday practices and some games.

According to Keogh, Dunlap emphasized conditioning in their training and slowly introduced more intense coaching techniques to the team.

“We ran seven miles on weekends,” Keogh said. “We needed to, because if we didn’t get our stamina up, we would all be exhausted during games.”

As the season progressed, injuries plagued the team: Vandevort tore her ACL in a game against Los Gatos High School, freshman attacker Emily Rich injured her knee during a practice and sophomore attacker Morgan Faye injured her elbow off the field. These injuries put the team in a position where substitute players were few and far between, putting more pressure on each individual.

“We were down to one substitute against teams that had triple the amount of people we had,” Keogh said.

Despite the lack of substitutes, the team still put their best performance on the field, working together to create a memorable season.

Mid-season, the Falcons began to see their improvements during games, winning three games in a row, 15-0 against Wilcox on March 28, 9-7 against Palo Alto on March 30 and 8-3 against Los Altos on April 1.

Senior midfielder Gilligan played a big role in helping the girls improve throughout the season. She helped the girls feel “confident and motivated,” Keogh said.

With their most notable game being senior night, the girls are all proud of everything they have achieved.

“I’m so glad the girls who joined are the girls I got to spend the season with,” Keogh said. “I am so proud of how we made little improvements everyday in our practices that resulted in a successful season.”