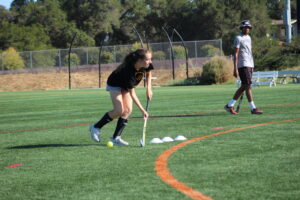 Sophomore Lexi Cleland gets ready to shoot a goal during practice.

Permalink
Two sophomores adjust to the challenges of playing on varsity and the tougher opponents they are facing this season.

After girls’ field hockey coach Jatin Sharma saw potential in  sophomores left full back Zinneerah Ahmed and center midfield Lexi Cleland, he brought them up from JV to varsity. Both Ahmed and Cleland had a drive to improve, which is a main reason they got moved up.

So far, Ahmed has enjoyed her experience on varsity, though she regrets not being able to finish the season with her JV teammates, whom she played with during her freshman year.

“The JV will need to find some new people to take over our positions, as they’re pretty important,” Ahmed said.

As a result of being moved up during the season, both players have faced some challenges, primarily of not being up to par with their other teammates.

However, their JV teammates have been supportive of the change, and the varsity team has also warmly welcomed the two new members, Ahmed said.

“Being moved up, you have to meet expectations and make sure you’re not holding anyone back on varsity,” Ahmed said.

Adjusting to the more intense varsity environment while managing the daily practices has proved to be challenging to both Cleland and Ahmed.

Though it is taking time to connect with new teammates and upperclassmen, the team has already seen the new players adapting well with the rest of the team. The upperclassmen are excited to have new players on the team and encourage them to play together.

“It’s cool to have underclassmen on the team. It’s definitely scary playing at a whole different level, but Lexi and Zinneerah are playing in positions we need and are helping a lot,” senior co-captain Rima Christie said.

As the season is coming to an end, Cleland and Ahmed are excited to play on the field alongside their new teammates for the remaining games.

“The energy has been brought up, and we want to win. We have a good team and a lot of experience, which will hopefully lead us to CCS,” Christie said.