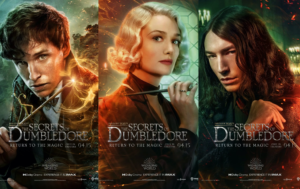 Permalink
The third installment of the Fantastic Beasts series delivers by listening to fans’ criticisms and by sidelining unnecessary characters.

My friends and I went to the local AMC 14 theater over Spring Break to watch “The Secrets of Dumbledore” — the third installment of the Fantastic Beasts series, which is set half a century before the events of the Harry Potter series and follows the magical side of WWII.

Though I expected a large turnout for a movie from Warner Bro’s biggest franchise, I walked into the theater to find it practically empty, which was reflected in the movie’s box office sales: The movie grossed only $43 million domestically in the first box office weekend, 42% and 30% lower than the first and second movie, respectively.

Given the first two movies’ beautiful visuals but mediocre, tangled plotlines and an overabundance of characters, I had low expectations; however, I came out of the movie thoroughly impressed.

The first two movies have a major problem with pacing, likely due to Harry Potter author J.K. Rowling — who was the sole writer of the first two screenplays — being unused to the limited time allotted in movies. In books, writers have all the time (words) they need for complicated plotlines, but screenplay writers don’t have that luxury. Rowling didn’t seem to get that, so many of the characters, including Newt Scamander (the magical zoologist protagonist), seem sidelined in their own stories.

For example, the first installment of the series titled “Fantastic Beasts and Where to Find Them” disappoints because of its lack of fantastic beasts and unfit protagonist character, Newt, who doesn’t seem necessary to the story’s plot. The second installment of the series titled “The Crimes of Grindelwald” similarly disappoints. I still know little about the actual crimes of Grindelwald, and the movie features multiple irrelevant characters.

However, the third movie turns things around. The first 10 minutes come complete with some of the coolest creatures shown in the Wizarding World, including a blue bird that puffs up into a balloon and turns into the most amazing dinosaur-esque magical bird I’ve ever seen — to be fair, I’ve only seen a few. And, the movie adheres to its name; I really did learn about “the secrets of Dumbledore.”

Despite my initial anticipation for the plot to center mainly on Albus Dumbledore, it focuses on the family as a whole. The movie covers Albus and Grindelwald’s romance and falling out, Albus’s sister’s death and most importantly, the origins of Credence, who was involved in the first two movies, as a Dumbledore.

Much of this improvement in the plot of the movies comes from the hiring of screenwriter Steve Kloves, who adapted all of the Harry Potter books into movies. Kloves knew which unnecessary characters to sideline, such as Newt’s love interest and Nagini.

The plot provides an aura of mystery and thrill, with humor injected in all the right places. Due to Grindelwald’s clairvoyance, Albus comes up with a complicated plan that confuses even the watchers making me feel like I was a character in the movie actually caught up in the confusion. Unlike many other movies, I was unable to predict what would happen next as the movie executes plot twists very well.

Another big improvement in the movie is that Newt is much more pivotal to the story. In short, the plot of the movie centers around a magical creature, and Newt’s skills as the only magical zoologist entangles him in Albus’s plot to stop Grindelwald.

Additionally, the movie continues a legacy of stellar CGI that characterize past films in the franchise. For example, the small fight between Albus and Grindelwald has some of the coolest CGI I’ve seen to date, and I loved seeing up close and personal magic, which is something I’ve seen in other shows but never in the Harry Potter universe.

However, although the plot has been improved and the CGI remains exemplary, I have one major gripe with the movie and the series as a whole: It tries to tell two different stories at once. The first is Newt’s and his fantastic beasts, and the second is Albus and Grindelwald’s magical feud. In this movie and the previous two, it felt like there wasn’t enough screen time for either of these two stories; as a result, viewers are left dissatisfied. Creating separate series for the two storylines would’ve solved this issue, allowing viewers to become more invested in both stories.

The final verdict:  The movie is a vast improvement on the first two installments, making me look forward to the last two, which are expected to come out in the next four to five years. If you end up having three hours of time during the busy weeks leading up to APs and finals, I strongly suggest you take a break and watch an amazing movie from the Harry Potter universe.