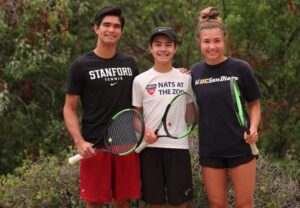 Permalink
Sophomore Luke Stratakos and his siblings SHS alumni Dean and Monica Stratakos all play tennis. Though their parents first introduced them to the sport, each sibling grew to love it more than any other.

“He was born on the tennis court,” said Sheila Stratakos of her son, sophomore Luke Stratakos, who will be playing for boys’ varsity tennis this spring.

She’s also the mother of Class of 2020 Monica Stratakos and Class of 2018 Dean Stratakos, two of the school’s past No. 1 singles tennis players. Monica now plays for UC San Diego and Dean plays at Stanford.

As for Luke, his mother said, he began playing with tennis balls before he knew how to run.

The family’s love for tennis began with their oldest brother Dean. Mrs. Stratakos had dabbled in tennis and she pushed her kids to try out virtually every sport: The three siblings tried out soccer, golf, basketball and swimming, among other sports — Dean practiced taekwondo and Monica also participated in volleyball, baseball, softball, volleyball, track and field, cross country and lacrosse.

However, all three chose tennis in the end, citing the individuality and personal responsibility of the sport, among other reasons.

“As is the case with many athletes, my sport helps me find balance in my days,” Dean said. “It gives me a great outlet for the stressors in other parts of my life such as academics, and it allows me to focus my energy into competition for a few hours each day.”

Having played tennis since age 5, Dean said it has always been a constant in his life. His dedication and drive for the sport also “transfers back” to the rest of his life.

He led the SHS tennis team to an undefeated season in 2017 as the team captain and MVP. Since then, he has earned 2019 Intercollegiate Tennis Association (ITA) Scholar-Athlete honors, and has most recently won the title of 2021 Pacific Coast Conference (Pac-12) Champion with Stanford, besting a collegiate athletic conference that has won more NCAA national championships in team sports than any other conference in history.

He attributes his success to maintaining a confident and positive attitude, a guiding principle throughout his tennis career.

“Tennis is a very mental sport. You can play tons of matches and practice for endless hours, but if you are not mentally strong, then you will not see success,” Dean said. “This mindset has helped me excel when things are going well but also allowed me to remain steady and level-headed even on the worst days.”

Dean said his parents have always been a source of unwavering support: Without them driving him to 6 a.m. tennis lessons, flying across the country for national tournaments and picking his spirits up after a tough loss, Dean said he “couldn’t imagine” getting to where he is now.

While his tennis role models have evolved throughout his career, Dean said that he is currently most inspired by teammates and coaches. He said playing on a team at Stanford is drastically different from the largely individual tennis he played in the juniors and high school.

In juniors tournaments, Dean nearly always played individually or with his doubles partner. While both high school tennis and college tennis consist of teams with 10 to 15 players, he said he spends every moment on the tennis court with his teammates at Stanford — every practice, gym session, match and more.  Each year, as seniors graduate and a new class of freshmen join the team, he recognizes the importance of establishing strong core values and principles.

In fact, he said many of his favorite memories come from his time on the college team, a sentiment echoed by the best doubles team of all time — the Bryan Brothers, who also played at Stanford back in 1996 through 1998.

“On our team, we have cultivated an amazing culture that allows everyone to lift each other up, hold each other accountable, and push one another to be better teammates, tennis players and people,” he said. “It’s such an honor to play for a bigger cause, and the best moments are when you have everyone behind your back cheering for you to triumph over your opponent.”

During a match right before the start of the pandemic, his team was the underdog against Ohio State. The score was tied at 3-3 with one match left, and it was all down to their freshmen. The match persisted for another three grueling hours, but their freshmen pulled through and the team rushed onto the courts to celebrate.

For Dean, the match was one of the most special moments in his tennis career because he knew the hours he and his team had put into practice finally paid off in victory.

He plans to continue building special relationships and experiences through tennis.

“While I don’t have aspirations of playing professional tennis, I will definitely continue to be active as I graduate college and begin working,” Dean said. “Tennis is a sport that can be played for a lifetime, and I know I will continue to build strong and long-lasting relationships through tennis.”

Monica, who also attributes the mental aspect of the sport as one of the main reasons she loves tennis, trains 20 hours a week, plus overtime on the weekend for tournaments.

“When Dean and I are both home from college, we practice together and motivate each other,” she said. “It is nice to have a built-in hitting partner who doubles as a brother!”

One skill that has gained her an advantage over other players is her lefty spin — it is difficult for right-handed players to play against left-handers because there aren’t many of them.

As such, Monica has modeled her spin after her role-model Angelique Kerber, a left-handed player from Germany. Monica starts off her games with a big serve and pushes through with her lefty spin.

She has been ranked among the top ten in Northern California by the United States Tennis Association (USTA) every year since age 10.

When she was 3 and Luke was 1, their parents introduced them to tennis by enrolling them in a camp. Since then, it has been one of the most important aspects of their lives.

“All of my closest friends have been made through traveling to tournaments across the country,” Monica said. “Tennis plays a huge role in my life as it helped me get into college.”

Since the National Collegiate Athletic Association (NCAA) passed a policy that would allow athletes to be paid by commercial sponsors last year, Stratokos has begun taking advantage of her Division I collegiate athlete status.

So far, she has collaborated with Liquid I.V., a company that provides “Healthy Hydration” in the form of non-GMO electrolyte drink mixes — one that she had been using prior to the deal — by posting about the company on social media in exchange for monthly products.

In the future, she hopes to collaborate with more brands. As a Division I athlete, Monica can make some side cash from brand deals as she does not have enough time for a full-time job.

Luke was inspired to play tennis after he saw his older brother taking the sport more seriously.

“Our parents pushed us into it, and I found motivation from my siblings pursuing tennis,” Luke said. “We found enjoyment in the sport and I grew to love it.”

Before Dean and Monica left for college, Luke loved hitting with them. Through practicing with his siblings — especially his left-handed sister — Luke gained the advantage of learning from a variety of playing positions and techniques.

He has played hundreds of tournaments around the nation, traveling to states including Arizona, Florida, Colorado, Georgia, South Dakota, Oregon, North Carolina, Texas, and more, though most are local or in Southern California. Luke currently ranks top 200 in the nation; right before the pandemic hit in December 2020, he ranked No. 10 in NorCal.

Luke recalls traveling with his siblings to national tournaments in elementary school, trips he treated as free vacations to play games and pass time while his brother and sister competed on the national circuit.

“It gets to a point where [my siblings] see my playing start to catch up and stop giving advice. It’s fun seeing them look a bit scared and put more focus every time our scores get a little bit closer,” Luke said.

While his siblings played a significant role in getting him to where he is today, Luke said he never questioned why he was playing tennis —  his love for competition was always there.

“There’s just something about being out on the court,” he said. “When you’re having a good day and you find the sweet spot of the ball, it’s such a nice feeling. Sometimes when I’ve got free time, I just get back in and serve.”

For Luke, being on the court is more than just a mental relief. It’s his way of expressing himself, of “hitting the ball so hard when angry” and reaching a state of happiness and peace afterwards.

Before the pandemic, he would practice at a tennis clinic three days a week, two and a half hours each day. Luke would play in practice matches with players around his skill level on weekdays and perform hand-feeding drills on weekends, where he would practice hitting the ball fed from a machine or his mother.

While lessons stopped during COVID-19, he continued to practice with his siblings.

However, when games started trickling back near the beginning of 2021, Luke had surgery on his left knee, a “wear and tear” injury he had already been battling for a couple of years.

Two days after the surgery, he was back to hitting drills on the wheelchair.

“I couldn’t move my leg but I kept hitting because I loved the feel; I didn’t want to lose it,” Luke said. “The combination of internal and external motivation and support from my parents is dialed in and keeps me going.”

He eventually progressed from standing up to walking on the court. Having received full clearance a couple months ago, Luke said he now works on strengthening and conditioning his body for a full recovery.

“I’ve been trying to stay away from doing things just because other people tell me to. And that’s opened up another perspective: to make sure I’m listening to myself as well,” Luke said. “There’s been a lot of influence and support in getting me to play the sport, and I love that, but it’s just a part of growing up. You got to come to do something you love.”