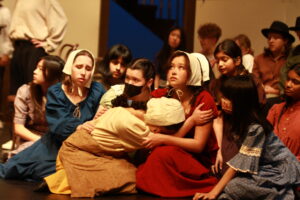 Photo by SHS Drama Department
Senior Olivia Smith as Abigail and junior Ella Tamas-King as Mercy Lewis and other ensemble members, which included middle schoolers, pretend to be bewitched in the courtroom scene during dress rehearsal.

Permalink
The drama program put on ‘The Crucible’ as this year’s fall play.

On the evening of Nov. 12, the lights dimmed, the curtains opened and the actors on stage danced in the darkness around a burning cauldron. The girls onstage laughed merrily, and as the dancing concluded, the audience erupted in applause and cheers as they were treated to the opening scene of this year’s fall play, “The Crucible.” Over 240 people attended opening night, dwarfing last year’s turnout which only drew around 130 people. The play was also performed on Nov. 13, 17, 18 and 19.

“The Crucible” is a play written in 1953 by Arthur Miller and based on the 1692 Salem Witch Trials. It serves as a reminder about the dangers of McCarthyism and the Second Red Scare, a period of mass hysteria around suspected communist sympathizers in the 1950s that was just ending during the time of the play’s release. The play follows a few characters and their responses to accusations of witchcraft in Salem.

Drama teacher Ben Brotzman, who directed the play, said he was happy with the turnout and performance on opening night.

“It went fantastic. We had a really good crowd, and the play seemed really well received by the audience,” Brotzman said. “The actors did a fantastic job, the tech ran smoothly and we had an overall amazing show.”

Brotzman said he noticed no major slip-ups by the actors, something he attributed to the countless hours of practice put in by the cast. The preparation gave them the skills to improvise on the spot when anything went wrong. During rehearsals, actors sometimes forgot their lines, in which case another actor would improvise theirs to keep the flow of the production going without any hiccups.

Brotzman also thanked the local sponsors who helped “make the play possible” by providing monetary contributions for accessories and pamphlets.

The play featured 36 cast members, including eight from Redwood Middle School. The decision to include middle schoolers was due to the low number of high school cast members this year, as they did not have enough members for the ensemble — the middle schoolers generally played non-speaking roles. Brotzman said it was a great opportunity to introduce drama to middle schoolers, which they may also do during the spring musical of “Mama Mia.”

“There’s no drama electives or clubs in junior high, and [middle schoolers] really only have the yearly musical,” Brotzman said. “We wanted to give them more opportunities [to act], and they were able to jump in with little rehearsal and do the show. They were fantastic.”

The set was hand-built by Cris Vaughan, who worked with the Saratoga Theater team during the three weeks before the show first aired, and the costumes were designed by sophomores Claire Zheng and Ivy Tian. Brotzman said there were a lot of student designers on the show, which excited him greatly.

The visually striking stage set and costumes awed many in the audience, including junior Katelyn Fritz.

“The attention to visual detail made everything appear super realistic,” Fritz said. “I loved seeing new characters walk onto the stage and taking in how their costume differed from the other actors.”

In addition, Fritz admired the actors’ attention to accurately portray their characters. A particular detail that stood out to her was the utilization of accents, which she believes provided depth to the characters and enhanced the overall quality of the production.

Senior Eli Tsives, who played the protagonist John Proctor, expressed heartfelt appreciation for the turnout on opening night, a factor which greatly motivated him along with many of the other cast members. Other star players included seniors Olivia Smith as Abigail, Ananya Gupta as Tituba and Anastasia Ramirez as Elizabeth Proctor and junior Ryan Cagliostro as Reverend Samuel Parris and sophomore Cosmo Cooper as Reverend John Hale.

“I’m very happy with the number of people that showed up. I feel like live theater is dying out, and we need to give more to it,” Tsives said. “I’ve been on stages where just the front seats are filled and nothing else, and it’s really difficult to give a performance like what we did today [on opening night, Nov. 12] when there’s no one there.”

Tsives mentioned that the audience turnout was partially driven by extra credit opportunities offered by a number of teachers. The proposal was initiated by Tsives himself, as he felt such an incentive was necessary to fill the seats.

In spite of the slightly disappointing reality, Tsives felt that the performance served as a great opportunity to allow students to see fellow classmates perform.

“I would rather have every seat full and give everybody an extra 3% on their grade as an added benefit,” Tsives said. “Because for an actor, when you’re on stage, there’s nothing more fulfilling than seeing a full theater.”

Tsives lauded his fellow cast members for the hard work they put in, which he feels paid off brilliantly in their stunning opening show.

“It was amazing and very emotional. My last opening fall play,” Tsives said. “I think this is the first time we have ever successfully run the show without anyone slipping up, and I’m very grateful for the amazing cast.”