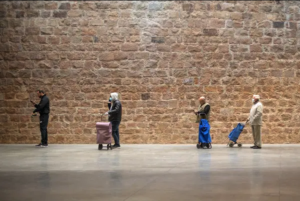 Using simple models on how viruses spread with no staggering actions such as cures, the Center of Disease Control (CDC) predicts that over the course of the pandemic, between 160 million to 240 million people worldwide could become infected.

Santa Clara County recently announced on March 17 a shelter-in-place order that limits activity, travel and business functions to the most essentials needs. This restricts the ability to leave the home only for the most essentials such as shopping at the grocery market and exercising, practicing social distancing and limiting contact with large groups of people.

However, many younger citizens seem to be unfazed by the current pandemic, ignoring any positive impacts that social distancing may have on slowing the spread of the virus. This is because the death rate for those between the age of 15 to 44 is about 0.5%, compared to 4.7% for those over 65 years old, leading to think that they are unharmed by this virus. Nevertheless, this low mortality rate for younger citizens does not mean that they should ignore the “shelter-in-place” policy. On March 24, a 17-year-old teen in LA died, under the suspicion that he had tested positive for coronavirus (though there were other health factors involved).

Many younger citizens who contract the disease are usually asymptomatic, meaning they do not experience the symptoms for the virus. This is extra dangerous because they are unaware that they are carriers and could easily pass this to other people without knowing, spreading the virus even faster.

In addition, many live with older relatives who are more prone to death, so isolation is important for stopping the spread of the virus, regardless of age.

On March 11, a study released by the Institute of Disease Modeling discovered that social distancing, where only 1 out 4 people continue to move around, could reduce the death counts by 92 percent by next month. This statistic should motivate all to stay self-quarantined for at least 14 days.

At this stage of the pandemic, all social gatherings are selfish. It is important to reduce the transmission of the younger people, as it could easily spread to the elderly.

Fortunately, there have not been any reported cases in Saratoga or Los Gatos yet, but that does not mean that we should roam around nonchalantly, but rather with more caution and awareness. One death due to the virus may be too late, and is a sign that many more people may be affected.

Therefore, it is safe and imperative for all of us to stay isolated during the peak of coronavirus — likely in April and May. Isolation will not completely prevent the spread of the virus, but it is our best tool in an increasingly desperate and dire situation.