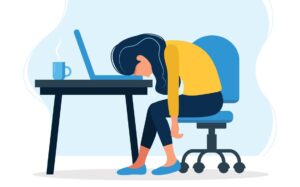 Until the pandemic hit last spring, AP Chemistry teacher Janny Cahatol was used to being able to drop her toddler son off at daycare and focus on her students during the school day. But since the transition to remote learning, she has found it difficult to separate her two worlds.

“Because I’m either in mom-mode or work-mode, I don’t get a lot of me time,” she said. “I’m working and planning until late at night, which gets so tiring I just want to sleep instead of do anything else.”

Cahatol is not alone in finding online school more tiring and challenging than in-person school. In fact, a nationwide phenomenon known as Zoom fatigue has swept across the country. This feeling of prolonged exhaustion stems from the fact that it is harder to digest information through video calls than it is in-person because of a lack of social cues.

Junior Anica Liu is one of many students whose screen time has increased significantly due to online classes. Ever since the shift, she has noticed changes in her energy levels.

“It definitely gets really tiring to be on screens all the time,” Liu said. “It’s not just because of Zoom classes, but also because the majority of my homework is online, including watching lectures.”

On top of her synchronous classes, Liu estimates that she is spending five to six hours or more on her laptop doing homework and rewatching lectures. Before March, Liu barely used her laptop for schoolwork because most of her work was handwritten.

Liu also noted that she has been spending much more time in synchronous online classes this semester than she did in the spring.

“Most of my teachers are using the full 75 minutes of class unless we’re taking a test or they finish lecturing early, which is a rare occasion,” she said. “It's definitely really different from the spring because basically all of it was asynchronous and teachers only used 15 of the 60 minutes to take attendance.”

Liu also finds herself easily distracted because of online schooling.

“The atmosphere just isn’t the same,” she said. “I get distracted a lot more when doing school at home because my phone, laptop and food are right there.”

While students battle learning disruptions, teachers are facing challenges of their own, too. Cahatol balances working with taking care of her 4-year-old son at home.

When her toddler is not at school, he has to be juggled between her and her husband, and teaching without distractions can be difficult. Cahatol even said that if her son did not go to preschool, she would have to quit teaching because there would be no way to manage it all.

“During one lecture, my students started laughing because they could hear screaming coming from downstairs,” Cahatol said. “Apparently, my son had been given the wrong type of Cheerios, and it was very embarrassing but also difficult because I had to refocus on the lesson and make my students do the same.”

In addition to distractions while teaching, she said she has been experiencing more stress from planning her lessons and exams than from symptoms of Zoom fatigue.

Cahatol said that communication with her students is one of the most difficult aspects of remote learning, especially if they have urgent questions.

“If there’s one typo in a lab, I’ll get 30 emails about the same thing, and I feel like I need to answer them right away because that’s the only way I can talk directly with my students,” Cahatol said. “Sometimes I want to tell them to come to tutorial, but tutorial is only once a week, and the material is so time-sensitive.”

Cahatol also noticed that her students often seem distracted during class. She once saw one of her students playing video games during her lecture, which made it difficult for her to focus on teaching.

On the other side of the screen, senior Neeya Devanagondi echoes the idea that learning virtually is distracting even when she is trying her best to concentrate.

“Sitting in the same desk the whole day just feels really weird, and I constantly feel like I need to get up and stretch out,” Devanagondi said.

Symptoms of Zoom fatigue seem to affect Devanagondi the entire day because the school day and work afterwards seem to flow together, making it feel like she is constantly working and never getting a break. Devanagondi said that she even naps in the middle of the day to have some sort of break in between lectures and homework.

Cahatol said she completely empathizes with her students on this note.

“It’s hard to keep up with everything,” she said. “There’s no distinction between ‘I’m in my work mode right now, and I’m in my play mode right now.’”