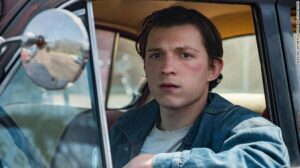 Actor Tom Holland plays Arvin Eugene Russell, the protagonist in “The Devil All the Time.”

With massive fan bases spanning all across the world, popular film stars such as Tom Holland, Robert Pattinson and Bill Skarsgård captured the attention of many after news of being cast in the new Netflix thriller “The Devil All the Time.”

After weeks of anticipation from fans, Netflix dropped the new movie on Sept. 11, delivering a two-hour clutter of random cuts, shallow characters and gratuitous violence.

The movie is an adaptation of Donald Ray Pollock’s novel “The Devil All the Time.” Casting several celebrities and even having Pollock himself narrate the film for authenticity, director Antonio Campos started with a good game plan. But what he ultimately delivered was far from gratifying.

The story is set predominantly in Southern Ohio during the 1960s and begins by following the protagonist’s father, Willard Russell (Bill Skarsgård), a distrubed army veteran. A little less than midway through, the movie transitions to focus on the protagonist, Arvin Eugene Russell (Tom Holland).

Spanning from Arvin’s birth to early adulthood, the film introduces multiple stories encompassing the ceaseless misfortunes in his town.

Arvin encounters a variety of psychotic and unsettling characters in his town, such as Reverend Preston Teagardin (Robert Pattinson), a hebephile (defined as a sexual attraction to pubescent aged children, usually ages 11–14), and Sheriff Bodecker, a corrupt officer who bribes crime lords to keep his name clean. Because of these characters and ongoing mishaps, Arvin ultimately devolves into a violent, religious fanatic, traumatized by great loss and insanity.

Despite the positive reviews for the novel, which obtained an 4.12 out of 5 stars on Goodreads, the film falls short of expectations and provides neither the thrill nor the mystery praised in the book.

In an interview conducted by GamesRadar+ with Campos, the movie was supposed to highlight religion and the result of transgenerational trauma from World War II. The storyline, however, felt rather shallow and cliché.

Rather than following a meaningful plot, the film is a series of events that seem to be the misfortunes of insane townspeople: crucifying a dog to spare Arvin’s mother, a spider bite leading to belief in resurrecting the dead and accidental suicide.

Additionally, the film jumps to multiple time frames, making it incredibly difficult to follow whatever plot was established in the first place. And because the plot lacks clarity, the film disappointingly lacks the mystery component.

Halfway through, the movie even shifts focus to a new plot consisting of two serial killer couples who are hardly related to Arvin. With little character development and background, it’s difficult to empathize with them.

On the upside, the accents were executed phenomenally. Despite being from foreign countries, Robert Pattinson, Tom Holland, Bill Skarsgård and many other cast members display flawless 1960s southern accents.

Pattinson’s performance particularly stood out. He captured the perfect balance between the hebephilic and charismatic traits of Teagardin.

Despite Pattinson’s stellar performance, the best-written character was Eliza Scanlen’s character, Lenora Laferty. She seems to be one of the few characters given more than a one-faced reality; she goes from a sweet and naive teenage girl who is sexually objectified by her classmates and becomes a target of hebephile.

Laferty portrays the image of a disturbed and traumatized adolescent girl who blames herself for the calamities brought upon her, despite being the victim. As a result of feeling like a family letdown, Laferty becomes suicidal.

Despite the overall letdown of their rendition of Pollock’s book, I’d still give props to Netflix for employing a superior cast, allowing the movie to trend with little promotion. If such respected actors were replaced by lesser known actors, the film would not have garnered nearly as much attention as it did.

But unless 138 minutes of confusion and psychotic characters sounds like a fun trip, I don’t recommend “The Devil All the Time” to anyone — not even die-hard Robert Pattinson and Tom Holland fans.