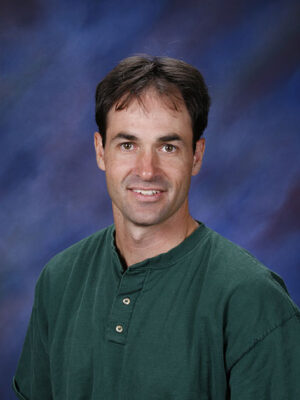 After 16 years, Mike Davey has decided to coach the girls' basketball team next year.

Longtime boys’ basketball coach Mike Davey will coach the girls’ team starting next season. The change was a personal decision; Davey’s daughters Samie and Rachel, entering sixth and fourth grades, respectively, will be coming up through the high school basketball program in the recent future, and Davey wants to make sure the team is in good condition when they arrive.

“[The Lady Falcons] have had five coaches in five years, so I want to make sure there’s some stability to the program since I plan to be here through at least my daughters’ tenure through the school,” said Davey. “Not that the past coaches have been poor, it’s just that I think it’s time for some stability for them.”

Davey said that he had originally planned on coaching the girls this season, but he changed his mind when he learned that this year’s coach only wanted the team for a year or two. Senior center Steven Walker was also a factor in Davey’s change of heart. Walker asked Davey to continue coaching for his last year of high school, and as Davey joked, “It’s hard to say ‘no’ to Steven Walker.”

Junior guard Owen Huang said Davey will be sorely missed among the boys.

“Before he came, Saratoga basketball wasn’t very good, but under him we started becoming really good,” said Huang. “He’s not a dumb coach; he knows what he’s doing. Everything he’s told me I try to keep it and it’s made me a better player.”

On the other hand, the girls are looking forward to having Davey on their sidelines. Junior Alex Sclavos said under Davey’s leadership the team should expect to do well next year.

“[Davey] is a really good coach and he’s been around the game for a long time,” said Sclavos. “We’re going to be in a tough league next year so having him as our coach will be a big help to the team.”

Next year, the girls will be moving into the De Anza League, the top division in CCS, so Davey has already started making plans for the upcoming season.

“We need to improve because we’re going to be in the A league next year,” said Davey. “I think we are going to run some different offensive sets and be more of a pressing team than we were last year. It hurts losing your point guard and your center, but I think we still have a lot of talent coming back.”

The boys will be led by current JV coach Trevor Naas, who has already worked with the majority of next year’s varsity players before. Davey said the coaching choice was made with the intention of making the team’s transition as smooth as possible.

“I think there’s going to be a lot of continuity in the boys’ program,” said Davey. “I’ve been involved in it for 16 years, so it’s important to me that the boys stay a successful and well-run program.”