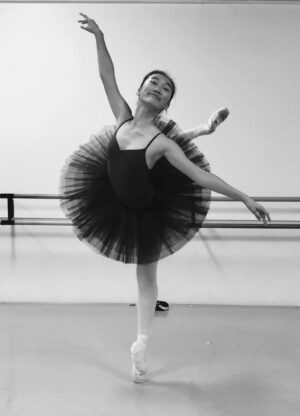 At age 3, senior Kaitlyn Thompson’s parents placed her in a ballet and tap combo class at Atlas School of Dance after seeing her natural affinity toward dance. Thompson has been dancing ever since.

“I love that dance has become my creative and emotional outlet,” Thompson said. “If I’m having a bad day at school, it disappears the moment I walk into the studio because all that matters is right there in front of me.”

Additionally, as a captain of the school’s dance team, Thompson dances from 2:30 p.m. to 5:30 p.m. on Monday through Thursday throughout the year, performing with the team at home football and basketball games and rallies. During competition season, the schedule gets more intense with Saturday practices and full-day conventions.

Although Thompson is currently on the school’s dance team, she has also danced for 13 years at Atlas School of Dance, during which she was on their competitive dance team until eighth grade; however, she finds dance competitions more difficult now than when she competed with Atlas.

“High school dance competitions require more team unison, practice and cleanliness,” Thompson said. “As you get older and better, so does your competition, and with everyone being really good, the stakes are higher and it requires more effort and dedication to place well at competitions.”

Sophomore Jordan Shyh is an assistant captain for the  dance team. She also started her dance career at a Bay Area dance studio, Dance Academy USA (DAU), where she took a ballet class at age 4. Throughout her time at DAU, Shyh’s passion for dance grew as she branched out to other styles.

While Shyh joined the school’s dance team this year, she spent seven years as a part of DAUPC, the competitive team for Dance Academy USA, and struggled at times to manage dance and schoolwork.

“Especially since I go to Saratoga High, the pressure and expectations are really high,” Shyh said. “I’m the type of person who doesn’t like to fail at anything, which makes it really easy for me to burn out. While school is my priority, dance is a really close second, so it gets hard to choose between them.”

Although Shyh still acknowledges the impact DAU has had on her dance career, Shyh believes that it was the right choice for her to join the school’s dance team, which, though rigorous, requires fewer hours than DAU.

“I really enjoyed the focus on technique and movement at DAU,” Shyh said. “Although on dance team we still work on technique, it’s a lot more team based and it’s a lot more fun being involved in school activities and school spirit. Practices are hard, but they are also so fun because everyone feels so comfortable with each other.”

Despite the difficulty Shyh says that she faces while balancing her schoolwork and her dance life, she believes that it is worth the struggle. Although Shyh doesn’t think that she will pursue choreography, she wants to continue dancing in the future and, if the opportunity arose, would have “no second thoughts” about becoming a choreographer.

Sophomore Brook Chuang has also had difficulty balancing her dance and school life; however, instead of one competition season, Chuang has an intense schedule year round, preparing for different shows. At Chuang’s studio, Los Gatos Ballet, she currently dances about 24 hours a week preparing for her role as Clara in holiday classic. “The Nutcracker.”

“Right now, in ‘Nutcracker’ season, my whole schedule is really intense,” Chuang said. “For example, my Saturday schedule is 9:45 a.m. to 6 p.m. nonstop dancing. It’s really hard to complete work because after ballet I am physically and mentally exhausted, but I still need to study and do homework.”

Chuang began dancing at 7, but progressed quickly, going on pointe, changing her technique to balance on the tips of her toes instead of on the balls of her feet at 10. She takes level 8 classes, the most difficult classes offered at Los Gatos Ballet, with mostly juniors and seniors.

While Chuang is a talented dancer, she doesn’t plan on pursuing it professionally, and says that the most difficult thing she has faced in her dance career is prioritizing academics over dance.

“Our teachers really want us to stay in the studio and work harder for longer hours,” Chuang said. “For me, it’s not physically possible because school is still my number one priority, but many girls at my studio are not focusing on school, so it gets hard to draw that line.”

Lee currently travels with Hollywood Vibe, a pro-am dance convention where amateurs are partnered with professional dancers. She is part of the contemporary company called CATASTROPHE! and has worked with many prominent choreographers such as Alexa Anderson, Brooke Lipton, Gigi Torres, Aaron Czuprenski and Cat Cogliandro.

Some of her most recent work includes being cast for a piece showcased on “So You Think You Can Dance” and performing for Madame Ghandi’s album release live show and her newest music video.

While Lee has found success with her pursuit of a dance career, it was difficult for her to initially choose to focus on dance.

“I never seriously thought dance could be a potential career because I was surrounded by people who were studying to go to schools like Harvard,” Lee said. “It was really hard on my mental health until I realized I needed to let go of the judgement I felt from others for wanting to be an artist.”

Lee decided to become a professional dancer early in high school after working with many different mentors and choreographers that showed her how happy people can be when they are passionate about what they do.

“I was so lucky to have gone to Dance Academy USA because it was always my second, and sometimes my first, home,” Lee said. “I am still in touch with my team back home and the others who graduated my year as well. Although we live in different places now, dance friends are forever friends.”