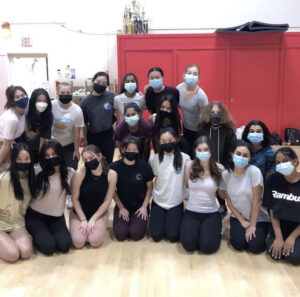 The new dance team poses after practice in the dance studio.

As soon as the energetic pom-pom music ended at a recent practice, senior Patricia Huang, one of the dance team captains, jumped to her feet and offered corrections to each member of the team.

Such corrections ordinarily have come from coach Maleia Fernandez, but she is out on pregnancy leave until December, just as the team begins preparing for their competition season.

In anticipation of this, four members of the team — juniors Kiana Compeau, Risha Desai and Avani Gupta and senior Maya Cranz — were designated to hold the newly created position of team officers.

Without their coach, the three dance team captains (seniors Huang, Jordan Shyh and Kaylie Wong) and four officers have stepped up to lead the team. The captains will be in charge of cleaning old routines and teaching new choreography to the rest of the team, with the support of the officers.

Senior Terry Parsons said she hopes that having more people running the team’s practices will leave the team more prepared for their competition season next semester, which is planned to run from January to March.

Until Fernandez returns, the dance team will practice under the supervision of spirit adviser Julia Peck.  Fernandez will continue to send the team captains instructions for how to lead practices, and team members will be required to send Fernandez video recordings of themselves reviewing the routines.

Without the guidance of a coach, the team has begun focusing more on small-group practices to ensure more direct feedback. Parsons said they usually split into smaller groups to work on a specific skill like turns, arm placement or performance energy, after which groups take turns performing in front of the team and reviewing feedback.

Because the captains are also part of all of the dances, they take turns stepping out to watch and clean the routines.

Huang said this was especially necessary because five new dancers joined the team this year: junior Ritisha Byri and freshmen Sophia Dicheva, Juhi Karamcheti, Anisa Taymuree and Saejel Thomas.  As a result of these additions, Huang is concerned about how the team will transition into practicing without a coach.

“Everyone needs to pull their own weight in order for this season to be successful,” Huang said. “We can’t have people randomly not show up to practice just because Maleia is not here.”

“Being a freshman on the team in itself can be intimidating, and with [Fernandez] leaving, it’s even more stressful to put together all of our dances,” she said.

Still, after an unconventional year online,  the team is thrilled to be back in the dance studio. Being in-person this year has made learning and cleaning dances much faster and has helped the team bond with each other.

For both older members of the team as well as newer members like Thomas, the opportunity to perform in-person is a huge motivation.

“I’m really excited for football games,” Thomas said. “Our dances are super hyped and I’ve seen videos of the dance team performing — it looks so exciting.”