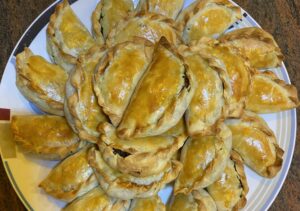 Curry dumplings are my family’s unique dish that we make several times a year, typically during family get-togethers. After rounds of inspiration, my mother came up with the recipe seven years ago.

Inspiration for ingredients in the dumpling wrappers came to her eight years ago from her friend’s cookie recipe. She said she also liked the fillings of curry dumplings from the supermarket, so she decided to create a recipe that included most of the ingredients in those fillings.

After perfecting the recipe through trial and error, she created the beautiful, golden dumplings with soft and buttery skin and delicious curry-flavored filling. Several years later, they continue to please our family and guests.

For Thanksgiving, I decided to try and make some curry dumplings with my mom. We planned on making around 30 dumplings, so we started by getting out two cups of flour, eight tablespoons of butter and eight ounces of cream cheese for the dough.

After melting the butter, we mixed all the ingredients together for 20 minutes, then wrapped up the mixture and placed it in the refrigerator for 30 minutes to make it more rigid.

For the filling of the dumplings, we stir-fried one pound of ground beef, one big onion and 80 grams of curry paste together.

Then came the interesting part: using the dough and fillings to fold the dumplings. This required skill that I did not have.

The struggle was real for me. Most of my mom’s dumplings looked delightful, with the edges pinched together gracefully, and they seemed especially great next to my lopsided, deformed dumplings.

Not only did I fail to create good-looking dumplings, but I also had a hard time determining how much filling should go into each dumpling.

After a while, I got the hang of it and went  faster, though my dumplings were not much better looking. Even though my mom tried fixing some of the dumplings I created, some of them were unsalvageable.

When we finally finished creating our 30 dumplings, we spread some beaten eggs on the outside of each dumpling and placed them in the oven for 15 minutes at 385 degrees.

As they heated, a pleasant smell wafted out of the oven, reminding everyone in the house that curry dumplings were being prepared.

We ended up with the heavenly curry dumplings my family has come to love. Though the dumplings I created looked terrible before we placed them in the oven, they seemed decent in the end and tasted just as good as the others.

Despite my lack of dumpling-folding ability, I enjoyed the process of making the dumplings with my mom. I liked seeing my slow improvement in creating dumplings, and the contrast between my dumplings and my mom’s dumplings was funny.

The best part, of course, was eating the dumplings, and they were delicious as usual.