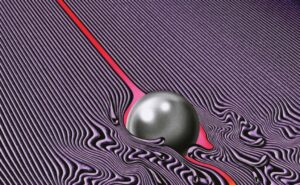 Entering the world after a year-long submersion in my own fantastical, isolated world has been abrasive, to say the least. After the days I spent squirreled away in my dim, warm room, my return to the white fluorescence and speed of “normal” life feels like I’m being dragged half-awake at 4 a.m. and dunked into an ice bath. Since I’m no Saratoga swim teamer, this has been a cold hell for me.

What’s softened the spiritual scratch of this jarring transition is music — specifically, the acclaimed album “Currents” by Tame Impala. A solo-produced persona by Kevin Parker, Tame Impala harnesses the influences of myriad genres — R&B, disco, pop — into their signature synth neo-psychedelia that drives “Currents.” Its synthetic audio effects halo vocals in a constant sibilant haze that floats effortlessly over the clear-cut instrumental terrain, crafting an intoxicating, irresistibly Martian repertoire. The speaker in “Currents,” however, is dichotomously, unapologetically human.

Throughout the album, Parker relinquishes control, questions unfulfilling intoxication, loses love, is mired in love triangles, navigates loves burgeoning, surreal and messy — the whole human shebang. Change and dynamacy are constant in the album, fitting themes for this time of adjustment and upheaval both personal and global.

It’s a common pitfall for experimental producer-made albums to feature scaffolding lyrics: lyrics that stand bare and scraggly and cling to the towering instrumentals for support. It’s also common for love songs and “human experience” songs to wander into a Sentimentia more dementia and delusion than sentiment and truth. Parker steers clear of both; the lyrics in “Currents” are in turns unflinchingly lucid and deliberately surreal, situating and deepening Parker’s virtuoso instrumentals.

“Currents” blasts off with the foot-tapping “Let It Happen,” in which spirited instrumentals hand off expertly with Parker’s dreamy vocals, hypnotizing with the urge to let life happen (the titular refrain “So let it happen, let it happen” sums it up well). Yet an individualistic ambition (“If my take off fails, make up some other story / But if I never come back, tell my mother I’m sorry”) and instrumental verve subverts the veneer of passivity for a message of purpose and destiny inhering within; the speaker has kept their passions and individuality tamped down but “can’t fight it much longer” — an especially relevant sentiment in a school where familial and cultural pressures constantly clip students’ personal ambitions.

Another song that feels particularly tuned to adolescence is “Yes I’m Changing,” a smooth, R&B influenced percussive number that’s par-for-the course dreamy, but especially emotional and personal, describing Parker’s breakup with fellow musician Melody Prochet. Lines like “Life is moving, can’t you see / There’s no future left for you and me” parallel high school relationships, where teens grow up and apart into their separate futures (“A world beyond that door / is calling out for you”). As someone who’s found herself on this forking road a few times, I could only intuit the feeling the song articulates: the ache brimming in the strong forward-facing beat, the grief and faux-blasé stoicism.

At the outro, a coruscating tinkle promises hope and a brighter future.

Parker bows out with the funky, nimble “New Person, Same Old Mistakes” in which Parker is reborn, yet finds themself sleeved by the body of their old self, a struggle that quarantine-hatched identities can relate to as they re-enter society. It’s a fitting, provocative end to a brilliantly dynamic album grappling with change and movement.

Having released four lauded albums over the span of a decade, Tame Impala is a fairly prolific artist. To me, “Currents“ is the trophy of their oeuvre, a stunning display of Parker’s  perfectly married instrumental rigor and lyrical precision. Moreover, “Currents“ invites the listener onto a psychedelic synth spaceship, where a seraphic-voiced Parker sings songs that speak straight from your bones and the gritty reality of life — the most comforting companion anyone could have returning to the outside world.