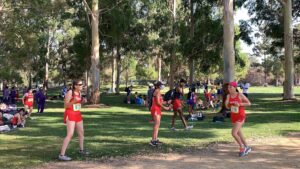 Senior co-captain Amoli Vanavadiya glanced at the clock as she raced by on the last leg of the Baylands Santa Clara Valley Athletic League (SCVAL) meet on Sept. 21. The numbers flashed red: 23 minutes and 7.9 seconds for 5,000 meters, a new personal best.

Such success contrasts with last spring’s pandemic-delayed and -restricted season. The number of cross country members was limited to around 10 members per gender last year due to pandemic concerns, but the two teams have increased to a normal 60 members total this year.

“Last year, we had less people and less meets, most of which were around the school,” Vanavadiya said. “We now have less restrictions, so there are team nights and more bonding activities. I think we can go pretty far from here and I’m looking forward to the future.”

While the girls on the team set their sights on breaking personal records in the aftermath of last year’s unconventional season, returning senior and boys’ cross country running star and co-captain, Harrison Dance, is in the process of securing a spot as a college cross country and track athlete at possible destinations like Georgetown, UC Berkeley and UCLA.

Dance has consistently placed high in both cross country and track meets. His accomplishments include winning the CCS Division III cross country championships in 2019, winning the Mt. SAC competition in 2019 and holding the current school record for the mile, running a time of 4:12.26 last school year.

“I want to run cross country and track in college because I’ve had a really fun time running out here,” Dance said. “The track is where I’ve made most of my friends, so I want to continue doing that in college.”

The boys’ cross country team is looking to qualify for the CIF State Championships in November, and Dance has made it a personal goal to qualify for the national cross country meet. He also hopes to break the school record for the 3,200 meters race — he currently runs a 9:15.20, just short of record holder 2015 alumni Steven Sum’s time of 8:56.86.

“I’m aiming to be a top seven runner for cross country in college,” Dance said.

The girls had an additional opening meet at Lynbrook High School on Sept. 7. Pacing the girls’ team so far with faster times are sophomore Sara Bright and juniors Elizabeth Stoiber, Elsa Blom and Isha Goswami. Other top male runners include sophomore George Hu and juniors Anand Agrawal and Wasil Khan.

As the teams start picking up in mileage and pace, both teams hope to make the post-pandemic season the best it can be.

“I’m just grateful for the coaches and everyone on the team who surrounds me with a positive attitude,” Dance said. “We have a great community and we’re just really excited to be back working together. I’m honestly so proud of how close the team has gotten.”