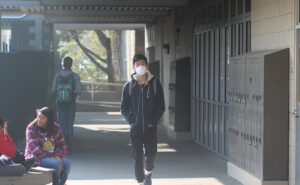 Masks were common in the week before Thanksgiving.

On Thursday, Nov. 15, students created a petition calling for school to be canceled the next day because of the smoke from the massive Camp Fire in and near Paradise, Calif.  The petition received nearly 2,000 signatures, but the district chose to keep school in session both Friday and Monday and Tuesday during Thanksgiving week.

“While a lot of people believe that it’s my decision to cancel school, it isn’t,” principal Paul Robinson said at the time. “Each of our school districts have talked with the county superintendents who makes the decision.”

With the Air Quality Index in the area reaching the unhealthy 200-plus range on Nov. 15, many students reacted angrily to this decision.

One typical comment came from junior Kai Zhang, who remarked, “Now I don’t need to visit Beijing.” Junior Brian Zhu added, “I feel like there’s a difference when a bunch of schools around the area do cancel, but we don't.”

However, he said, because of the ventilation systems in schools, school can be a safer place for some students whose homes don’t have functioning air filters.

“It’s been kind of scary and I think we’ve come close to the brink of strongly considering canceling school,” Robinson said. “One concern is that I’m not quite sure if it’s healthier at home than it is here at school. You’re either going to be home or you might go out and the smoke is still going to be there so the air quality is still going to be bad no matter where you go.”

According to Robinson, there is no specific Air Quality Index number that needs to be met for school to be canceled. For schools that chose to not cancel school, precautions and other safety measures were taken to decrease the time students spent outdoors.

“We tried to cut down on any strenuous activities here on campus, provide inside places for students to be and monitor everybody and make sure they’re OK,” Robinson said.

Due to the poor air quality, various sports and activities were canceled or rescheduled.

According to athletic director Tim Lugo, outdoor sports, such as girls’ and boys’ soccer practices, were canceled and the girls’ water polo CCS finals and cross country CCS finals were postponed. For indoor sports, including basketball and wrestling, practices were moderated to ensure the safety of all athletes.

“There are instances like that happen where it’s out of anybody’s control,” Robinson said. “It’s just making sure we’re keeping everybody informed and we’re trying to do the best we can to hold school when we can hold school.”

During this time, numerous fundraisers were also organized and efforts made to help those affected by the fire. The school collected almost $3,000 in gift cards and donations to send to fire victims in Butte County. Some teachers also organized their own fundraiser, Tacos for Paradise, which was scheduled to occur on Nov. 28, where all proceeds went to victims of the fire.