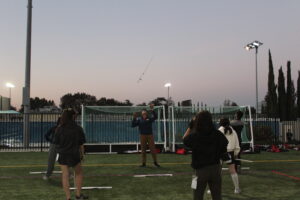 The Color Guard and marching band lined the edge of the football field on Oct. 9 in anticipation for their first show at Cupertino’s Tournament of Bands, an annual high school marching band competition at Cupertino High School. Donning blue and yellow costumes, the Color Guard pulled band students into a world of pure imagination through their performance. For the opening to their intricate choreography, they executed a series of three tosses with flying flags, each embroidered with an eye at its center.

“I remember looking up into the audience and thinking, I’m going to remember this forever,” senior co-captain Kavya Sarathy said. “There’s a bit of calm right before, in which everyone’s anticipating what you’re going to put out on the field.”

After last year’s canceled competitions and Zoom practices, Color Guard is spinning back into action with an altered season schedule. A lack of experience has been the biggest challenge, participants said.

An influx of new underclassmen joined the Color Guard program this year. In a team of 25, only seven are upperclassmen while the other 18 students are new, according to Sarathy.

In pre-pandemic years, the season had two weeks of band camp and practices every Saturday. This year, band camp was only a week long and day-long practices occurred two Saturdays a month. This reduced practice schedule, coupled with last year’s lack of competitions, made it difficult for underclassmen to visualize and understand how a normal year would run, Sarathy said.

As one of the three seniors in the program, Sarathy has felt  substantial pressure to set a good example for younger participants.

“Once you have a very strong skill set you can apply that to a lot of things, but building that skill set is difficult,” he said. “It’s a little bit harder to work with new people because you have to explain the fundamentals.”

The captains’ and new students’ efforts culminated in their second-place finish in Auxiliary (guard) at the TOB, where the field show they performed “Be Anything, Anywhere, Anyone,” and won first in the 6A division. The Color Guard also recently earned  first place among other high school guards in the area at the Annual Foothill Band Review at Foothill High School.

“I’m really proud of everyone,” Kapasi said. “I think it’s very hard, especially our first competition, to know exactly what you’re doing, especially with so many new people. But there’s always room for improvement, even if you have the best show ever.”

After what she describes as an “eye-opening” first competition to what guard is and how it feels to perform, freshman Niraali Garg attributed the success to the leadership.

“I love all our upperclassmen and guard staff, they’re all so helpful and they’re great role models to look up to,” she said.

Coach Brittany Bennet finds it “heartwarming” that at their first competition in two years, the team was able to “shale some of the rust off and go out there as if they’d never left.”

The imbalance in experience has had two sides to it, the coach said: Having a lot of newer members allows the Color Guard to start fresh and establish a good skill set, while having a lot of veterans gives them strong leadership and peer mentorship.

“The students’ hard work and dedication makes all the stress worth it,” Bennet said. “Watching that ‘a-ha’ moment when someone finally understands how to properly execute a skill is so worthwhile, and we’ve been seeing that more and more as the season progresses.”

For her part, Sarathy is confident about the future of the group.

“I have a lot of faith in the junior captains and I think they’re very capable of continuing our legacy of responsibility and discipline,” Sarathy said. “After I graduate, I know that our team will be in good hands.”