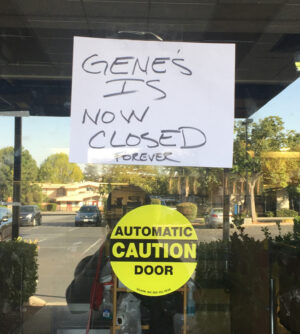 To the dismay of countless Saratoga residents and some who live beyond the city’s border, the beloved, family-owned grocery store, Gene’s Fine Foods, whose illustrious lifetime spanned 47 years, closed in early October as a result of owner Dick Giomi retiring and rising rent at its location in the El Quito Plaza on Cox Avenue.

Giomi was almost able to negotiate a deal with a major grocery chain as a potential buyer of Gene’s but once Amazon announced its plan to buy Whole Foods, the entire grocery store community was affected and the deal fell through, according to The Mercury News.

Throughout the years, the store received praise for its fresh produce and savory meats, but, more importantly, it became a local favorite for its customer service and connection to the community.

While some community members discovered the news of the store’s closing through The Mercury News, others such as Sandra Vick, a math tutor for several Saratoga High students, found out when they walked up to the dimly lit store and saw the makeshift sign and empty shelves.

Recalling memories as a child when she would browse Gene’s alongside her mother, Vick said that it had become her go-to store ever since.

“I’m very sad,” Vick said. “It’s my ritual to come here on Sundays to get a special meal and make a special Sunday dinner. Now I’ll have to go somewhere else to get it.”

Aside from her Sunday meals, Vick said she will also miss the familiar faces who worked at the store, some of whom she remembers from her childhood.

Even shoppers who haven’t been life-long patrons of Gene’s agree that the employees themselves proved to be as essential a component to the shopping experience as the food itself, if not more.

“They’re all so wonderful. They help [shoppers] out with the groceries and have a lot of fun among themselves,” said a Saratoga resident named Phyllis, who declined  to give her last name.

Phyllis has shopped at Gene’s for about a year, noting that the store ran like a “family affair” in which all contributed.

The loving atmosphere within the store is a factor that prompted  70-year-old Julie Tomlin, now a resident of the Monterey Peninsula, to make her way to Gene’s whenever she happened to be in the area. Before moving, Tomlin lived in Saratoga for 31 years.

“The store was family owned and something they took pride in,” Tomlin said. “It was the customer service that they valued that [customers] could really sense, and now we have no place to go for [that kind of] service.”

Once she heard about the closing, Tomlin, armed with her trusty cooler to store meat and produce, made the journey to Saratoga for a final goodbye to the store and its employees, only to find it already closed.

“They’re cleaning out the store. The inventory is off the shelves. It’s very, very sad. It’s just tragic,” Tomlin said as she stood outside Gene’s on a recent afternoon.

After moving to the other side of the hill, one of the biggest challenges Tomlin faced was the shortage of quality grocery stores. She has tried shopping at several grocery stores in the area only to find that they still didn’t compare to the quality and caliber of Gene’s.

Tomlin attributes the increasing trend of closing mom-and-pop grocery stores to the rise in people who choose convenience over quality. Shoppers who opt out of cooking healthy meals with nutritious ingredients and choose the produce offered at large chain grocery stores have led to the decline in these generational, privately held grocery stores.

“I think people are cooking less,” Tomlin said. “People are not willing to cook wholesome foods into meals, because they'd rather buy something online, premade, microwaveable or delivered to their door since there’s no time for cooking.”

She believes the closing of Gene’s is symbolic of  this trend.

“Times are changing and it’s [saddening] to think of how some of these things that are real quality and have some value [can’t stay forever],” Tomlin said. “It runs much deeper than a grocery store.”