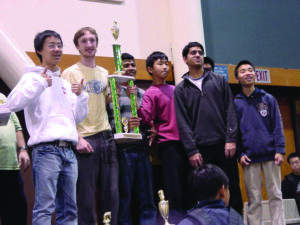 “For the first time in about four years, Saratoga was not favored to win the High School Championship,” said junior Charles Sun. “Mission San Jose was top seed this year and we were wary of the competition. Although, before the last round, we almost knew for certain we had the state title.”

According to assistant coach, 2008 alum David Chock, it doesn’t take a huge budget or lots of equipment to form a good team. A good chess team can come from anywhere, and it is hard to tell where the next top team will be from.

Although the students came in with slightly lowered expectations, they pulled out on top.

“This is the fifth consecutive win, meaning that a whole high school generation has elapsed since the first win,” said Chock. “That makes this states win especially sweet.”

Most of the players have been playing chess since at least seventh grade, so the team is hoping that they will be able to recruit more students from Redwood Middle School to become part of the team as they move on to high school. Next year, the team will lose some of its key members to graduation, including Young, Alex Lun and Avinash Kumar, but this has yet to discourage the team.

“We learned this year that we’re still a strong team despite graduating seniors,” said Sun. “I have high hopes for next year and believe the team will still be a major contender for the state title in years to come.”