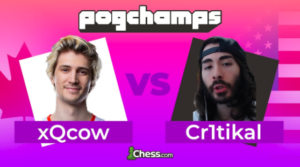 Thumbnail for xQcow and Cr1tikal’s remarkable chess match in a tournament, where Cr1tikal won in 6 moves thanks to a suggestion of a sequence of moves from his coach.

If you look at Twitch — the most popular platform for live streaming — the majority of the games being streamed are filled with flashy gameplay and graphics.

But not chess. That’s why I found it bizarre to see chess as the most popular game for a short period of time near the beginning of quarantine. I mean, just look at it. It’s just simple pieces moving around the board. Nothing flashy — you certainly don’t see the bishop fly up into the sky and dive into the knight to capture it, or the queen stomp on some poor pawn and crush it into the floor.

Apart from it trending on Twitch, chess was also more visible following the release of the miniseries “The Queen’s Gambit” on Netflix in late October. Being an extremely popular show, tons of viewers started learning and playing chess, facilitated by the various chess websites.

Although chess’s unexpected time in the Twitch and media spotlight has received mixed responses from the chess community, I think the attention chess has been getting recently is great.

Having these large streamers play chess brought in many viewers, who may decide to watch more chess (like watching grandmasters play) or even start playing themselves. A larger viewerbase and more players has made the chess community flourish and receive more attention from people and the media alike.

Unfortunately, there was some elitist backlash within the chess community to streamers playing the game. Notably, Grandmaster Ben Finegold criticized Grandmaster Hikaru Nakamaru for taking advantage of Félix Lengyel’s (nicknamed xQc) fame. Nakamaru had taught xQc the basics of chess during a livestream receiving a million views. Finegold also called out Albert Zheng, nicknamed BoxBox, another streamer notable for his skill in playing online video games.

“xQc and BoxBox have negative talent in life,” Finegold said. “Obviously, if you’re a normal person who has talent, you ignore the people with no talent. But Nakamaru’s like ‘He gets more money than me, he gets more viewers, so I want to try to get in on that.’”

His statements are pointlessly elitist. Although they aren’t particularly skilled at chess, xQc and BoxBox clearly have talent in their mechanical skill at video games and their charisma (which is demonstrated by how many viewers they have on their streams). And in what world are streamers wanting to promote the game you love problematic?

Although I’m not the biggest of chess fans, watching chess’s resurgence has been amazing. Chess is something that truly deserves the recognition, for all of its long (and hilarious at times) history to its many great variants to its incredible capacity for depth.