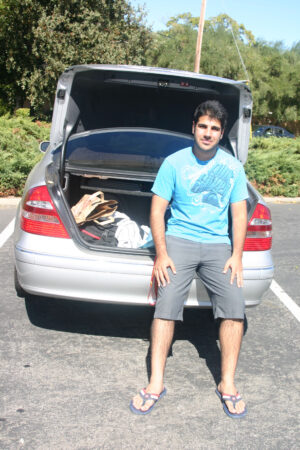 Some students keep their cars completely spotless. Senior Kabir Jiandani is not one of those students.

Ever since Jiandani got his 2008 silver Mercedes Brabus last year from his older brother, he has never made much of an effort to keep his car tidy. He blames this habit on a variety of things, particularly his heavy schoolwork load as an upperclassman.

“When I first got my car, I really wanted to be able to clean it on occasions,” said Jiandani. “Junior year made that nearly impossible with all of the work that I had to do, so not cleaning my car has become a habit.”

Unlike most students, Jiandani does not have a locker to put his school stuff in. In fact, he has not had a locker since his freshman year, since he forgot to get one every year since then. So where does Jiandani put all of his textbooks binders? The answer: the floor of his car.

“It’s fair to say that my car is my locker. I’m comfortable putting a lot of my stuff in my car, so when I stopped using my locker I just put all of my school stuff on the floor and in the trunk of my car,” said Jiandani.

Entering Jiandani’s car, one will find not just textbooks, but a vast expanse of papers. These can range from old homework assignments, quizzes and even SAT prep papers from his junior year. Most of the papers scattering the floor are useless to him now, since they’re so old.

“I never really have had a place for old schoolwork, so most of it goes on my car floor,” said Jiandani.

To make matters even more interesting, Jiandani doesn’t seem to mind the extreme disorganization in his car. Most students with such a mess in their car would be embarrassed by the situation, but Jiandani believes that it just adds to the uniqueness of his car.

“Honestly, I’m fine with the mess. It kind of makes my car different and more unique than others, and I like being able to say that my car is very different,” said Jiandani.

Jiandani may not have the cleanest car out there, but that’s about where the disorganization begins and ends in his life. Outside of his car Jiandani makes sure that almost everything is tidy: his room, his schoolwork, and himself included. His car just seems to be the only thing that happens that does not fall under that category.

“Generally, I’m an organized guy, but I have a lot of old paperwork from school and not much time to do anything with it, so it all ends up in my car. I don’t really mind having it that way because I don’t live in it,” said Jiandani.

Even though Jiandani’s car is a jungle of old homework assignments and handouts, it could be worse. Let’s just hope that senioritis does not make it any messier.