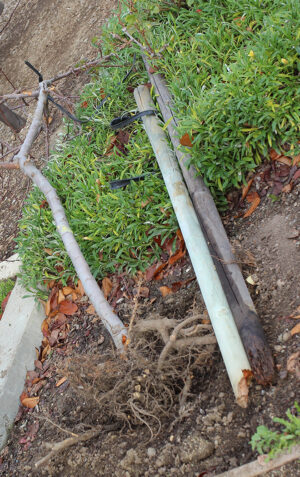 On Dec. 16, the maintenance team returned to campus from the weekend to find that someone had thrown a tree into the school’s pool.  The tree had been uprooted from the Hyde Park area near the upperfield.

“There were also broomsticks, traffic cones — just somebody was walking around throwing whatever they could find into the swimming pool,” custodian Luis Sanchez said.

Besides the tree, several other objects had been thrown over the gate into the pool area. Along with the hassle of removing all of these objects, the custodial staff also had to sweep up the soil in the pool area and filter it out of pool water.

Sanchez said the tree will be replaced and hours of labor went into fixing the damage. There are no suspects in the vandalism.

Earlier in first semester, someone siphoned the fuel out of one of the school’s vans in the back parking lot by cutting the hose under the body of the vehicle, resulting in $800 worth of damage.

“This mindset of doing so much damage to get maybe $80 worth of gas, it’s not OK and it’s really hurting us,” Sanchez said.

School officials said these acts of vandalism and theft may seem like jokes or pranks to the perpetrators, but if they continue, the administration will have to think twice about some of the improvements it is making around campus.

For example, the administration has recently spent $10,000 on new signs and murals across campus.

“Ten thousand dollars can go into a lot of things, but we’re choosing to upgrade the exterior of our hallways,” assistant principal and leadership adviser Matt Torrens said. “If kids are going to deface [the refurbishings], it’s going to take away from its value.”

Although the district pays tens of thousands each year to maintain school grounds, Sanchez said the effects of vandalism extends far beyond a simple financial burden. School defacement also has a negative impact on the school’s social environment.

“If a young freshman walks in and sees graffiti in the bathroom ceiling, then all of a sudden, he thinks it’s OK,” Torrens said. “That’s the biggest potential for destruction— that young kids might see it and think that behavior is OK — and it’s not.”

Sanchez said he and other maintenance workers try to clean up the graffiti as soon as possible, because he “[doesn’t] want any validation or gratification of [the perpetrators] coming back with their friends in two hours or the next day.”

Although they are almost always successful in erasing the graffiti quickly, the constant back and forth is both a tiring and demoralizing process for administration and custodial crew. In fact, the school estimates that on average, the acts of vandalism occur at least once a week. This causes administration to always be on the lookout for new graffiti.

“We have our custodial crew, our assistant principals and our principals all pop their heads into the bathrooms since then, just to make sure everyone’s behaving correctly,” Torrens said.

One danger of graffiti or vandalism, Torrens said, is that it can cross the line into being a kind of hate crime if targeting specific individuals or groups, as has happened in the past at the school. He recalled a 2003 incident where someone had written graffiti on a classroom window that a teacher was gay — an act of vandalism that could be charged as a hate crime.

For Torrens, he said the battle against vandalism and graffiti is something more students need to be aware of and take seriously.

“Kids think it’s a joke, but they don’t realize how much cost is going into it,” Torrens said. “There’s a physical cost, there’s a social cost and there’s an emotional cost.”