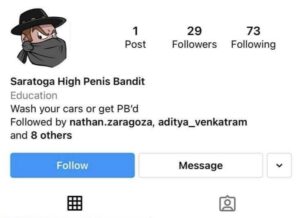 Permalink
The so-called “Penis Bandit” has made their mark, targeting the windows of upperclassmen’s vehicles

With the growing number of dirty cars in the parking lot, a pair of students — both of whom asked to remain anonymous — have been drawing inappropriate images on the dusty windshields of parked cars, taking photos of them and posting them on Instagram.

The self-dubbed Penis Bandits say they attack purely for comical purposes and as a way to display their “artistic talent.”

“One day, I noticed that a majority of the windshields were covered in sheets of hazy yellow pollen. That’s when I had a lightbulb moment” one of them said.

Over the course of the past few weeks, a large number of upperclassmen have complained about the frequency of the attacks, frustrated that they have to wash their car to erase the inappropriate drawings.

That being said, the two say they are proud of their actions, pointing to an increase in cars being washed. They said they recognize that many people are growing angry and the threat of them getting exposed is increasing, but they remain indifferent to people’s emotions.

One victim of the bandits was junior Samika Agarwal.

“A few weeks ago, I returned to my car to find the ‘art’ plastered all over my rear windshield,” Agarwal said.

Unfortunately for Agarwal, she forgot to clean her windshield following the attack, and was forced to face the questioning of her parents.

Agarwal said that she wasn’t greatly affected by the attack and viewed it as creative and funny. However, multiple classmates of hers have become increasingly irritated and embarrassed over the drawings.

The administration has currently made no efforts to stop the attacks, as they have not received any complaints from students affected.

Assistant principal Brian Thompson noted that if any complaints are brought up, the school will immediately take action and begin surveillance within the parking lot.

“If necessary we can employ the use of security cameras and have administrators patrolling the parking lot,” Thompson said.

One of the bandits said he has decreased the frequency of attacks in order to prevent complaints from arising, but vows he will continue to do his drawings until they are caught.