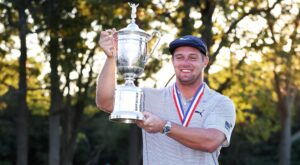 On Sept. 20, 27-year-old pro golfer Bryson DeChambeau stood over a six-foot putt for par on the 18th hole at Winged Foot Golf Club, his arms fully extended and in line with his putter shaft. This was an atypical method of putting, but it worked for him.

After striking the putt, he watched the ball intently as it rolled down the green and dropped into the hole. He pumped both his arms into the air in excitement; he had just won the U.S. Open by a wide margin of six strokes.

By winning one of the two most prestigious golf tournaments in the world, DeChambeau has demonstrated that his unprecedented methods and ideas actually work.

DeChambeau is one of the most unusual golfers ever to play on the Professional Golfers Association (PGA) tour. While others traditionally rely on tempo and feel to swing a golf club, DeChambeau uses science and physics to simplify his swing, increase consistency and maximize the amount of distance the ball travels.

For example, he sets up for a golf shot with his left arm very straight, while other golfers typically have it slightly bent. Most players are taught to straighten out their left arm when they swing back, but DeChambeau sets up with his arm straight and keeps it that way throughout his swing so that he does not have to adjust the angle of his arm in the middle of his swing.

His approach is all about reducing the number of moving parts during the swing.

DeChambeau’s methods and success have inspired many golfers, including some younger ones, to embrace their own style of play.

This season, DeChambeau averaged the longest driving distance in history with 322.1 yards, thanks to the 30 pounds of muscle he gained during the offseason. His success challenges the old idea that players who add a lot of muscle and weight will be restricted in movement and lose touch, the ability to control distance on shorter shots.

“It’s unlike anything I have ever seen before,”  Murthy said. “The amount of weight and power he put on is astounding.”

Murthy, who also plays as a center and linebacker on the boys’ football team, gained around 20 pounds of muscle himself through football training since freshman year.

Gaining strength from football had helped him swing a golf club with less effort, he said. This has led to increased stability and control.

DeChambeau’s win at the U.S. Open was especially impressive since Winged Foot Golf Course usually favors straight hitters instead of far hitters. Although DeChambeau hit the fairway only 41 percent of the time during the tournament, he hit it far enough so that he often left himself in a good position to hit the green.

“His impact will definitely be big because he's making people change the way they look at the game,” said senior Albert Jing, another starter on the boys’ varsity golf team. “I think many younger players will follow suit and start putting on some pounds to pound their drivers further down the field.”

One downside of DeChambeau’s sudden muscle gain is that he has increased his chances of suffering an injury. Burry, like many professional golf analysts and coaches, said he believes that DeChambeau may soon get an injury.

Time and time again, the PGA Tour has seen players who suddenly put on muscle go down through injuries due to reduced flexibility, strain on weaker muscle groups, and trying to swing too hard. Examples include Jason Day, Brooks Koepka and even Tiger Woods.

Although many believe that an injury is inevitable for DeChambeau, others believe that his trainer, Greg Roskopf, will keep him injury-free with his approach to fitness.

His system is based on improving balance, retaining flexibility and mobility and never letting any one muscle group get stronger than the others. According to Roskopf, DeChambeau’s flexibility has actually increased from when they started working together in 2016.

One thing is certain: Whether he’s introducing new ideas to the sport or polishing his skills, DeChambeau will continue working as hard as he can to improve his game.

“I think that in the future, DeChambeau could be as, if not more, influential than Tiger Woods,” said freshman Ryan Lin, a potential starter on the boys’ golf team. “If he keeps winning, I think he could change how golf is played.”