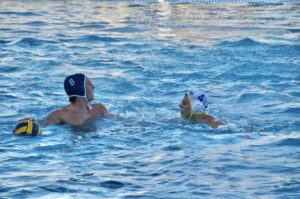 The 2021 season tested the members of the boys’ water polo team in ways none of them could have ever imagined.

First came the unexpected death of coach Jerome Chung in early March — a blow that many of them were not sure they could recover from. In his place stepped special education teacher Courtney Crase. A former Division 1 water polo player and SHS coach, she stabilized the situation and enabled them to have a season.

Games started in April and were full of COVID-19 scares as well as hard-fought wins and losses They beat Monta Vista, Cupertino, Fremont, Santa Clara and Milpitas and lost to Lynbrook and Harker, finishing with a record of 10-4.

The team played Milpitas on April 22 and led 15-10 with 3 minutes left in the fourth quarter. But the game remains unfinished. The reason: a positive COVID-19 test, later found to be false, by a player on the Monta Vista team. Play was suspended as soon as the results of the test became known.

“I think the season went pretty well, considering the long break most people had since last season,” said junior Marcus Kuo, an attacker and hole set and the reigning league MVP. “Although pretty much every team in our league has regressed, we're close to last year's level and are winning most of our games.”

On the other hand, senior goalie Dylan Overby said the season went “all right considering the circumstances.”

“We obviously didn't run many of our plays and generally we had pretty bad defense and offense with really slow starts to games,” he said. “Overall, I think we could've done much better but this wasn't the worst season we could've had.”

Junior wing Kian Kwa said the team could have played better in some games. Against Lynbrook after starting in the first quarter down 3-0, Kwa said the team “shot themselves in the foot.” The team equalized after goals from Kuo and junior wing Jonathan Li, but would lose after Li missed the game tying shot.

“There were some individual players who missed some key offensive opportunities in the beginning, such as myself,” Kwa said. “Last year if a starter made a careless mistake, Coach would be able to pull him out and replace him with someone on the bench, but now, because of a loss of depth, sometimes the starters have to play the entire game.”

One such game was the team’s thrilling overtime 17-13 victory against Monta Vista on May 27. They had entered halftime down 8-2, but the starters were able to dig down and equalize the game in the fourth quarter, forcing an overtime where they would then win off four consecutive goals by Kuo.

Overby said that the game started “extremely slow” with “virtually no defense.” However, he said coach Crase was able to motivate the team and pick up the pace.

“We caught back up through excellent play and were able to completely shut them down in OT,” Overby said. “I think that if we could have played like we did in OT all season long, we only would've lost to LG.”

“Even when we were down six I knew we were going to win,” Jarvis said. “When Coach Crase sparked a desire to win into some of our guys it became more and more obvious that we would win.”

The transition from former coach Jerome Chung to Crase required some adjustments.

“Chung was a very analytical coach who taught us a lot of plays that opened up many opportunities for us to shine, while Crase has worked on a lot of fundamentals like passing and shooting,” Kwa said.

As the season progressed, Crase became a part of the team. And while someone like Chung’s shoes can never be filled, Crase did an amazing job coaching, according to Kwa.

Having filled in on an emergency basis, she will not be coming back to coach the team next fall.

“"It will definitely be difficult having to transition to another new coach and their style of coaching,” Kwa said. “But I think we can do it.”

Coming into the season, the team had lost seniors Nima Amenizedah, Bryan Chu, Eng Kwa and Grant Chen to graduation. Last season, the team made CCS and won league championships for the first time in five years. However, they weren’t able to move up to the De Anza league because Gunn refused to drop down after seeding last.

“The team has a good shot at making CCS again and moving to the upper league,” Chen said. “They have a lot of returning players that are still juniors and a great freshman goalie in Ricky Li and will be amazing next year — sky’s the limit honestly.”

“I think we have learned from these tough losses which will allow us to grow as a team,” Kwa said “I also think that since we are retaining our entire starting lineup, we will be able to translate the success we have in the latter half of this season to next season.”