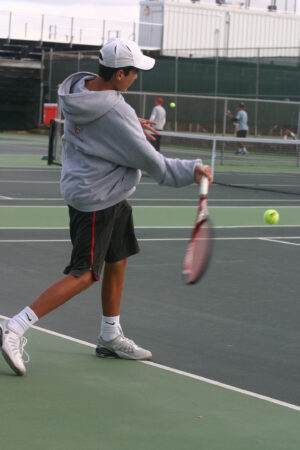 After second place finishes at CCS and Norcals last year, the boys’ tennis team is looking to replicate its performance in the upcoming season.

Repeating the team’s dominant title run at the California High School Tennis Classic will be more difficult this year with the absence of five starters from last year, including top singles players John Lamble and Michael McGinnis, who now play at Santa Clara University and Boston College, respectively.

“Although our team isn’t as strong as it was last year, I think we still have a pretty good shot a going deep in the tournaments,” Jayashankar said.

Coach Tom Uyehara will be returning for his fourth season and will be aided by new assistant coach Florin Marica.

“We are going to be playing without some of our key players from last year, but we are still the favorites to win our league and do well at CCS,” Uyehara said.

The team plays in the De Anza League, and will play their season opener against Gunn High School on March 1. The players’ strongest rival will be once again be Menlo, the school that accounted for their only losses last season. The team will also face challenges from Bellarmine and Monte Vista.