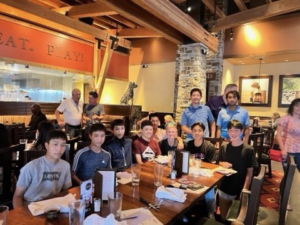 Photo by Howard Shu
The team poses for a photo during their end-of-year banquet at Lazy Dog on May 15th.

Permalink
Despite losing six of their best players to graduation, the Falcons ended the season performing better than expected. Junior Cameron Sy qualified to continue on to CCS finals.

In the last two years, the team was considered the strongest in the league and went undefeated. But out of the top six on last year’s roster, junior Howard Shu was the only remaining veteran star player following recent losses to graduation.

This year, Shu was supported by juniors Sankalp Aswani, who transferred from Lynbrook to SHS this year, and Cameron Sy; sophomore Ryan Lin; and freshmen Aidan Smith and Oliver Pott.

The travel team acted in a tight-knit, unified manner on the courses. Aswani said that playing golf with the team allowed him to build strong friendships.

Lin said the success of the team was partially due to the amount of practice they were able to do during the pandemic. With more time to practice, Lin — who is one of the newer players — was able to make a smoother transition onto the team.

According to Shu, though they played well at League Finals, CCS was not a good day for the team. At CCS, the vast majority of the team could have played significantly better and could have shot about five strokes better than they actually did.

“None of us really played well except Sy,” Shu said. “It was kind of disappointing, but I’m excited for what’s in store next year.”

The future outlook of the team looks bright since it is relatively young. Despite the graduation of their sixth-best player, senior Nicolas Chang, the top five starters will all be returning next year.

“With all the uncertainty coming into the season, we certainly exceeded my expectations,” Shu said. “Our players will be more prepared coming into next year, and I think our future potential is unbounded.”