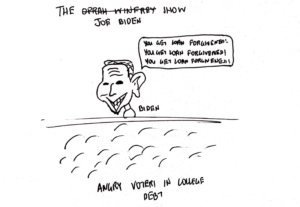 Permalink
His plan sets a dangerous precedent for future loan forgiveness and fails to solve the root cause of student debt.

Student debt. A two-word phrase that inevitably pops up whenever college is mentioned, especially as former students often spend decades paying it off. This issue has seen even more limelight lately with Biden’s recently introduced student loan forgiveness plan, an ambitious piece of legislation that aims to fix this problem.

The plan offers loan forgiveness of up to $10,000 for all applicants and up to $20,000 for Pell Grant recipients (a subsidy provided by the federal government for undergraduate students), with an income cap at $125,000 for individuals and $250,000 for households. These caps represent the bottom 95% of individual and household incomes, respectively.

Applications opened in October, and people are expected to receive their money a few months after they submit their application. However, as of Nov. 11, applications are currently on hold due to pending legal cases.

Over 43 million people with a total of $1.6 trillion  of student debt will benefit from Biden’s plan; yet, while this plan does provide relief for many suffering from student debt, it is only a band-aid solution that sets a dangerous precedent for future governmental aid by ignoring the real issues behind student debt: skyrocketing college costs, which have almost tripled in the past 40 years from $8,000 to $22,000 per year.

An average 4-year degree costs a student approximately $142,000, placing an enormous burden on students, especially those who graduate with majors that offer low wages after graduation.

A recent report shows that a third of college graduates cannot repay their debts in the first decade after graduation, especially for majors like drama, art and dance. This phenomenon is commonly known, and lists of “bad college majors” appear all over the internet, citing majors with poor employment rates and low median salaries.

Rather than forgiving student debt, the Biden administration should work to address growing college costs by instituting variable tuition caps for the 3,000 colleges and universities that receive billions in federal funding or whose students receive federal loans. This way, students in less profitable majors will be able to repay their loans without government help down the line.

High schools can also change their curriculums to teach students more financial literacy and money management. The root cause of student debt is students attending expensive college for jobs that pay little, and with more education, students will be better prepared to make decisions regarding their college education by potentially choosing a cheaper college over a more expensive one.

Currently, many colleges are simply increasing costs year after year because they know students will pay them, either by taking out loans or paying out of pocket. Another aspect of Biden’s plan — increasing the amount of money given through Pell Grants — worsens the problem by encouraging colleges to increase tuition.

Biden’s plan also has a breathtakingly high cost of around $400 billion, and this high cost sets a dangerous precedent of loan forgiveness in the future. This is already the case in many other U.S. industries, such as airline and banking sectors. In these businesses, companies grow so large and are so ingrained into American society that they become “too big to fail.” Notably, the government bailed out many companies during the Financial Crisis of 2007-08, and more recently, the government provided a $25 billion bailout to struggling airline companies during the pandemic.

Paralleling this idea to student debt, this plan sets the precedent that the government will continually bail out students with debt. If they forgive student debt in 2022, why won’t they in 2026? 2030? Since the plan does not address the root causes of the issue, the government could be forced to continually spend more money and solve none of the real problems.

The plan also seems like a play for Biden to increase his low approval ratings before the midterms, which have hovered around 40% for the past few months; in October, they dropped to 39%.

As of mid-November, Biden’s plan is on hold because multiple states have taken legislative action against it, and notably, a federal judge in Texas struck down the plan for not being within presidential authority.  The Texas lawsuit was filed on behalf of two plaintiffs that wanted a formal notice-and-comment rule to submit complaints: one that did not qualify because her loans were not from the federal government and the other that only qualified for $10,000 because he did not receive a Pell Grant.

These lawsuits halting the implementation of Biden’s plan should be a time for his administration to take a step back and reconsider the efficacy, if not legality, of his plan in the long-term. Biden’s plan offers an easy, temporary solution that solves few problems of student debt for people across the country. Rather, it furthers national debt and seems like a play for Biden to increase his approval ratings rather than a truly durable measure.