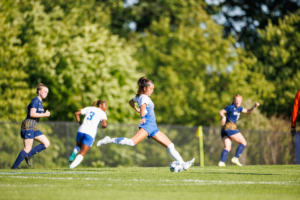 Permalink
Alumni discuss their recruitment experience, sharing the hardships and benefits of the path they took to get to college.

Every year, about three million high school seniors write essays and fill out applications for universities across the nation. At the school, seniors tend to apply to a high number of schools, creating a highly stressful and competitive environment as they scramble to get their essays in before hard deadlines. But one path that much fewer students take is athletic recruitment.

Such students have the opportunity to verbally commit to colleges as early as the summer before their junior year under athletic recruitment. Often, college teams’ roster spots are highly competitive with thousands of student-athletes aiming for them and hoping to catch the eye of college coaches.

DIII athletes are not offered athletic scholarships from the universities they attend, a major difference from athletes in DI and DII schools. These DIII schools, however, offer the highest percentage of financial aid. Once DIII athletes commit to the school, they receive a letter of intent, but there’s nothing in writing that guarantees admission into the school.

DIII schools also cannot officially give acceptance before the application process, so athletes submit an early application that includes a series of academic reads, transcripts and supplementals. The school’s admissions officers tell the specific coach whether the athlete is strong enough before receiving acceptance into the school often in December with all the early decision applicants.

At the school, around seven to ten athletes commit to various sports such as soccer, track and field, cross country, golf and badminton every year.

The Falcon interviewed alumni who went through the college recruitment process in recent years.

Class of ‘21 alumna Michelle Lim applied for early decision to Wellesley, a liberal arts college in Massachusetts, in December of her senior year.

While many athletes start their recruiting process in sophomore year, Lim’s process started before her freshman year with Invitation (ID) soccer camps, camps attended by aspiring players who hope to get noticed by colleges they potentially want to attend. Such opportunities were a result of her play with her club team.

In most sports, school teams are usually a secondary priority for athletes. Playing on a club team allows athletes to expose their talents to college coaches who do not show up for school games. Club teams also let players play against higher caliber competition, coming from a pool of the entire U.S. Some athletes do not even play for the school team to have their training be more focused and competitive.

“My first priority when I was looking at schools was a good academic institution,” Lim said. “I knew from the beginning of my recruiting process

that I didn’t want to settle in terms of academics just so I could play DI.”

For Lim, one of the biggest challenges was having to narrow down a list of possible schools. This had to be done significantly before most students and was made harder as she had to find a school that suited her academic pursuits alongside having a strong soccer program.

She added that it takes a lot of time and effort to facilitate relationships with coaches, as she often woke up at 5 a.m to call soccer programs in the East Coast.

Even though Wellesley coaches were interested and in communication with her, Lim says that she didn’t get an “easier senior year,” a common misconception for recruited athletes. She took four AP classes and worked hard to keep her grades up.

Along with school work, she practiced five days a week for 4 to 6 hours a day and had one to two games every weekend that often required her to travel almost every weekend.

“Going through the recruitment process is definitely harder [than college applications],” Lim said. “I had to know where I wanted to go by my freshman year of high school. Recruiting takes a lot of time: You have to make videos, email coaches, call coaches, travel for games and visit schools all while balancing club teams and regular high school.”

Class of ‘20 alumnus Kevin Sze was recruited later than most athletes, between his junior and senior year. He competed for one of the three open spots on the 7-man team at Harvard University.

Sze began playing golf at 7 and ultimately decided to get serious about the sport during his sophomore year, starting his recruitment process while ramping up his already hyper-competitive training schedule.

“I think the [application and recruitment process] are very different,” Sze said. “The application process was obviously a lot easier, but I was on that grind [for golf] since I was seven, which is obviously a pretty big time commitment.”

Because he really enjoyed playing the sport, it was an easier route to navigate through because he didn’t have to focus on what he didn’t enjoy. But in terms of effort, he says that it takes a lot of time to get to where he is today.

Although the Ivy League universities boast a sub-10% acceptance rate, having a secured spot on an athletic team came as a big relief.

Sze adds that he chose Harvard because the “academics were too good to let go.” Although Ivy League colleges do not offer athletic scholarships, he still found Harvard to be a great fit since it allowed him to play golf and perfectly suited the academic rigor he desired. Some of the other colleges he was in communication with would have made him pursue professional golf very intensely without much focus on academics — something he was not particularly looking for.

“There’s no secret to finesse your way into a position on the team,” Sze said. “If you’re good at what you do and you’re ranked high, colleges are going to be interested.”

Class of ‘22 alumna Anjali Nuggehalli, who attends Pomona University, verbally committed to DIII women’s soccer at Pomona-Pitzer during the summer before her senior year. She described her recruitment process as “incredibly difficult” because she was trying to find a school that suited her academic goals along with a strong athletics program.

“I wouldn’t say that [recruitment] is harder than [college apps] but I think it’s a really common misconception that athletes who commit earlier than regular students have it easier because they have spots allotted to them,” Nuggehalli said.

She emphasized that athletes have to be able to get into these schools on their own merit while navigating through a lot of different options all at the same time. Athletes from all over the U.S are working to get one of the around six spots that are open in a typical team, she said.

“I wouldn’t say recruitment is an easy process at all, and it’s not for the faint of heart,” Nuggehalli said. “But I think both processes teach you a lot about yourself.”

She urged athletes to be their own biggest advocate and to not wait for opportunities to present themselves. Nuggehalli said athletes have to be vulnerable to put themselves out there even if it might be scary, whether it is reaching out to coaches or sending highlight videos.

She added: “It’s important to do your research and make sure that you can see yourself being happy about school even if you didn’t have sports because sports can be taken away at any point and your experience should not be affected by whether you can play a sport or not.”