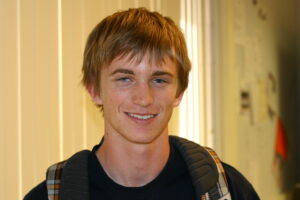 It was an intense wrestling practice. The room felt like a sauna. Sweat was steaming off of the hard-working athletes. The team was preparing for a tough tournament that they would attend the following weekend, and everyone was anxious. The only thing I remembered from that day was the face of the person I was wrestling. The rest was a blur.

It was an intense wrestling practice. The room felt like a sauna. Sweat was steaming off of the hard-working athletes. The team was preparing for a tough tournament that they would attend the following weekend, and everyone was anxious. The only thing I remembered from that day was the face of the person I was wrestling. The rest was a blur.

I had gotten a concussion. It was the second that week and the third of my life. Teammates and coaches describe it as one moment I was fine and the next I was staring into space, unable to utter coherent words or move properly. I couldn’t remember what I had eaten for lunch that day one year ago.

The ER doctor diagnosed me with a traumatic brain injury and sent me to a pediatric neurologist. The neurologist specified it as post-concussion syndrome, which is a fancy way of saying I have microscopic tears in my brain tissue that are a result of multiple concussions. He gave me the disappointing news that I would not be able to play lacrosse in the spring or wrestle the following winter because the consequences of sustaining another head injury were too high to risk. Now, a full year later, I am not cleared to play any sports yet, or even run.

I still go the same neurologist and every time I go, I hear the same demoralizing words; “You’ll get better, It just takes time.” The tough thing about post-concussion syndrome is that unlike a broken bone or knee surgery, there are no x-rays or scans that show the damage or indicate how long it will take to heal. There is no set date of when you will be done healing. The brain takes its sweet time.

For my whole life, I have defined myself as an athlete and my extracurricular life has been sports. When I was faced with the devastating news that I wouldn’t be able to play my favorite sports, I was forced to re-invent myself. This task is much more difficult than it sounds, but I quickly latched on to some less dangerous hobbies such as photography and rock climbing.

What most people don’t understand about concussions is that while the brain is healing, everyday activities and uses of the brain that we take for granted are hampered. You may not think about it very often, but the brain controls everything you feel, think and do, and an injury has serious consequences. In the worst period of my concussion symptoms, I would be trying to focus on homework and many hours later find myself staring at a wall, having done one problem. This made even the easiest of homework assignments and tests extremely challenging, and even hopeless at sometimes.

Another common symptom of concussion injuries are problems with mood. Horrible overall mood, terrible mood swings and depression occur regularly in head injury patients, so if I have snapped at you anytime last 12 months, blame it on the concussions. Another symptom I have noticed to this day is that highway on an off ramps and elevators make me nauseous, when I used to be able to handle roller-coasters all day.

A common misconception of a concussion is that it only happens with a knockout punch or an extremely forceful blow to the head, but this is only one way to get a concussion. A person can sustain a head injury even if there isn’t an extreme impact to the head: Multiple, less forceful hits or constant jarring of the head can cause a concussion injury just as effectively. This type of concussion can be even be more dangerous, as the symptoms are hard to diagnose and can go unnoticed until the injury has worsened, which happened to me.

An extreme example of this is the “walking dead” syndrome, where a concussion patient refuses treatment because they feel fine and after a few hours or even days, they suddenly die. This scenario occurred with the tragic death of famous actress Natasha Richardson in March 2009. Richardson sustained what the ski-resort paramedics diagnosed as a minor concussion in a skiing accident, on a beginner slope. Claiming to feel fine, she refused to go to the hospital and later the next day, she died from bleeding in the brain.

The modern research on head injuries is sparking much needed debate in youth and professional sports. Since most coaches aren’t aware of the seriousness of head injuries, it is common for a an athlete to get a concussion and then be put back into the same game. If the player sustains another concussion before their brain has healed from the first, they can start causing serious and irreversible damage. School administrations around the country are taking head injuries into greater consideration and are making changes to try to prevent them.

Washington state recently passed a bill that requires sports programs to educate athletes and parents and train coaches about head injuries. The bill also says that an athlete who gets a concussion must be approved by a certified health care provider before returning to their sport. California is in the process of legislating a similar bill. And the NFL, the toughest league of all, is even starting to take the problem seriously.

My post-concussion syndrome has given me so much grief that in cannot adequately express my experience with words, but in a weird way I am glad it happened. Everyone is forced to re-invent themselves at some point in their life, and I was given the unique opportunity to do so at age 16. I desperately miss playing sports, but if I had I not sustained this injury, I would not be the same person I am today. I have learned a lot about life from this incident and I now have the mentality that if I am able to overcome this situation, I can handle almost anything.