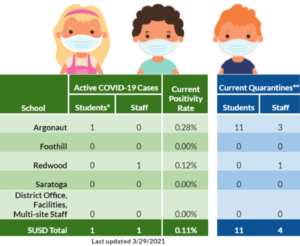 Editor's note: This article's original headline, "Elementary school reopenings lead to a COVID-19 case," inaccurately depicted the reopenings as a direct cause of the COVID-19 case. These events are not related; the current headline has been updated to reflect that as of April 4, there have been no cases of in-school transmission at SUSD.

As students in a fifth-grade classroom at Argonaut Elementary began packing up at the end of the school day on March 29, principal Karen Van Putten walked into the busy classroom and spoke quietly to teacher Matthew Gregory.

As their discussion intensified, Van Putten and Gregory announced to the group that their classmate had tested positive for COVID-19 and the entire cohort, made up of 11 students and three staff members, would need to quarantine and temporarily resume distance learning.

The school immediately emailed the families with students in the cohort and provided further instructions. Parents were told to schedule a COVID-19 test regardless of their child’s symptoms, take a COVID-19 test themselves and provide the test results with the school. In addition, they were asked to quarantine their child until April 4 and monitor their child’s symptoms for 14 days until April 7.

This small COVID-19 outbreak is a reminder of the likely setbacks against a still highly contagious virus that continues through the U.S. population. Schools all over the country have had similar experiences as they transition to bringing students back to in-person settings.

While the cohort was sent home and immediately quarantined, Argonaut did not release the information to the larger school community about the outbreak in the fifth-grade classroom.

Van Putten referred questions about the outbreak to the human resources director of the school district, Kym Imai. Imai said the school is following Santa Clara County Public Health protocol but did not provide further information due to confidentiality reasons.

According to the county protocol, a school must close only under the following circumstances: 1) Within a 14-day period, an outbreak has occurred in 25 percent or more stable groups in the school or 2) at least three outbreaks have occurred in the school and more than 5 percent of the school population is infected. Because Argonaut’s case did not fall into either category, in-person school continued with only the affected cohort being sent home.

Vihaan Reddi, a fifth-grade student in the affected cohort (as well as the younger brother of one of this story’s reporters), felt that despite the positive COVID-19 test of his classmate, he still felt safe about returning to school assuming everyone tested negative and continued following the safety guidelines.

“Everyone kind of expected that there would be a positive test sometime,” he said. “This was the first one that happened, and they did the best they could and handled it fine.”

Despite the risks, after a month of in-person school, he thinks returning to in-person school was worth it, as he has found it much easier to learn when the teacher is present to help. In addition, he believes the social interactions with his classmates have improved his morale through a difficult year.

His mother, Anitha Reddi, stated that while the case was concerning, they had anticipated this kind of outcome happening and considered it a necessary risk.

“Even knowing this risk, we wanted to continue doing in-person school, and it’ll probably keep happening as more people go back,” she said.

Both Vihaan and Anitha Reddi found the school’s response to the incident appropriate. While it’s not perfect, they look forward to returning to in-person learning, and many educators agree despite the occasional positive test.

“I have seen the impact of distance learning on kids first hand, and I want my own children back in the classroom,” Argonaut teacher Kelly Kannberg said. “My own 10 students that have come back to in-person learning seem so happy and are benefiting socially.”