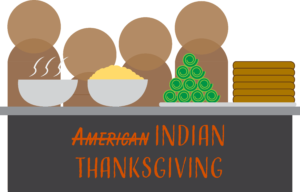 Indian Thanksgiving started when my aunt, uncle and cousins moved from Chicago to the Bay Area and wanted to spend time with family. Thanksgiving offered a great opportunity to get together — the kids were on break and the adults were more than ready to kick back and relax.

There was just one problem: the Thanksgiving menu. They are vegetarian. My family — and most definitely my brother and I — are not.

But despite our mountain of protests, we both folded and accepted that our Thanksgiving meal had to be a vegetarian, Indian dinner for “the good of the family.”

And out went the turkey and in came dosas, thin fried pieces of bread with spices inside. Mashed potatoes, a staple side dish, disappeared in favor of potato-loaded samosas. Cranberry sauce gave way to sambar, a traditional Indian curry.

Now, I can’t lie: Indian Thanksgiving is definitely something everyone should try at least once in their life. The flavors are mouth-watering and the rainbow of colors on the table are eye-candy compared to the beige, Turkey-and-carbohydrate palette of conventional American Thanksgiving meals.

But as someone who eats Indian food every day during the year, it was disappointing to not experience traditional American cuisine at least once a year.

So, after much brainstorming, my family came up with a compromise. If our relatives came over on Thanksgiving Day, we could have an “American Thanksgiving” the weekend after. That way, I could get my turkey fix while still accommodating my uncle and aunt’s dietary restrictions.

Now, the annual “Indian Thanksgiving” with my relatives and family has become one of the greatest reunions of my lifetime, filled with a myriad of delicious, savory dishes. I can only hope that peace remains for this year’s festivities, lest lactose intolerance or a gluten allergy ruin our carefully constructed Thanksgiving-menu compromise.