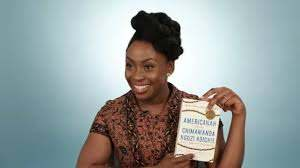 Photo by Courtesy of Literary Hub

Adichie holds up a paperback copy of her book, Americanah.

Following a series of brutal, racially motivated murders of Black citizens across America, I, along with much of the nation, engaged in anti-racist protests, conversations and education.

Although I couldn’t continue to attend protests without endangering my family and possibly bringing COVID-19 home, I still wanted to aid the current movement against social and institutionalized racism. Being confined to my own house, I began to read recommended books about the topic.

Throughout the summer, I read multiple brilliant anti-racist books including “Between the World and Me” by Te-Nehisi Coates, “The Bluest Eye” by Toni Morrison and “How to be an Antiracist” by Ibram X. Kendi. But of all the reads, my favorite was “Americanah” by Chimamanda Ngozi Adichie.

I was drawn to the novel because I recognized Adichie from a TED talk called “The Danger of a Single Story” I listened to a few years ago in speech class. In her TED talk, she spoke about the ways stereotypes and prejudices stem from lack of representation and how she has been impacted by the “single story” phenomenon. In addition, Adichie has also authored novels including “Half of a Yellow Sun,” “That Thing Around Your Neck,” and “Why We Should all be Feminists.” My love for Adichie’s TED talk set the bar high, but “Americanah” did not disappoint.

One of the most memorable scenes in the book occurs when Ifemelu goes to a dinner party and meets a young Swahili immigrant. During the dinner, the two converse and discuss America’s odd discomfort with talking about race.

In the scene, Adichie writes, “We don’t talk about [racism]. We let it pile up inside our heads and when we come to nice liberal dinners like this, we say that race doesn’t matter because that’s what we’re supposed to say, to keep our nice liberal friends comfortable.”

What made this scene so powerful was not only that Adichie is able to bring the reader to a series of revelations about the prioritization of comfort in the nation, but also that she embedded all of these revelations within a storyline.

When I started delving into anti-racist literature, a big challenge I faced was finding books that were both structurally and vocabularily accessible. While all the anti-racist books I picked up over the summer were immensely valuable, it was challenging for me to transition from my usual literary diet of narrative-based fiction to a genre that was heavily non-fiction and sometimes thick to read.

Adichie’s exploration of American anti-Blackness through the lens of a prosaic, yet still realistic, piece made “Americanah” less daunting and more approachable.

Although Adichie is careful about how she transports her readers around the issue of race, she has far fewer reservations about where she transports them. Namely, she is unafraid to delve into all the ugly and gritty aspects of America’s relationship with race.

For example, when Adichie explores the role of white allyship in anti-racist work, she writes, “Many whites with the same qualifications but [Black] skin would not have the jobs they have. But don’t ever say this publicly. Let your white friend say it. If you make the mistake of saying this, you will be accused of a curiosity called ‘playing the race card.’”

This scene was especially powerful for me because, despite being familiar with witnessing this racial double standard in real life, prior to “Americanah,” I had never been able to conceive this phenomenon as anything more than an uneasy feeling.

Adichie’s frankness in approaching racial issues not only makes her commentary on race more approachable but also validates the countless experiences of Black people and other people of color across the nation – many of whose experiences, like mine, often feel intangible or underrepresented in literature.

For readers who are interested in diving into the realm of anti-racist literature, “Americanah” is a great starting point for an accessible, powerful read.