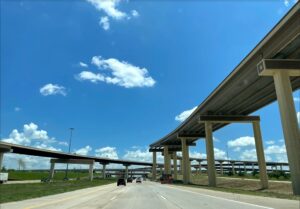 Photo by Jason Cheng
Driving to Dallas a day before our flight home, unaware of the the disaster that was about to occur

Permalink
Recounting my experience of being stranded at the airport — it sucked.

It was supposed to be a pleasant family vacation: a 10-day visit to Pittsburgh, where my older brother attends college at Carnegie-Mellon University.

Flying to a side destination on our way back to California, we made our way to the last destination: Texas. Unfortunately, the unbearable 100-degree heat and stifling humidity hindered our ability to enjoy adventures in the jam-packed cities of Austin and Dallas.

By the time our Texas trip was over, we were looking forward to our 8 p.m. flight home — homesickness and heat exhaustion had settled into all of us throughout our vacation. After a final meal under the piercing Dallas heat, we drove our rental car over to the airport.

We quickly realized that we shouldn’t have taken the toasty weather for granted — what started as an unexpected drizzle erupted into an enormous downpour. Cars slowed to a halt on the highway, but our Honda Civic treaded forward through the tempestuous conditions.

Luckily, we made it to the airport just in time for our flight — or so we thought. After a quick glance at the flight schedule, we saw that our flight had been delayed, along with numerous other flights to and from Dallas.

We strolled through the security checkpoint and settled down at our gate for the evening. We knew it would be a while before our flight took off, but we thought our situation wasn’t too bad — at least our flight hadn’t been canceled entirely.

What followed was a chaotic mess of gate changes and delays, sprinting around the airport in circles like headless chickens. After five hours of uncertainty, a worker for American Airlines appeared at 1:30 a.m. and announced, “This flight has been canceled.”

A cacophony of nervous chatter exploded as passengers frantically rushed to the already mile-long line to reschedule their flight. We immediately scanned our phones for the next flight — all of which were fully booked.

A sense of panic and hopelessness flooded over us as we sunk into our chairs. We were essentially stranded in Dallas: no flight, no hotel, nothing. Despite the setbacks, we eventually devised a master plan.

After an all-nighter at the airport, we set off on an Uber at 6 a.m. to a nearby rental car center, with none available at the airport. As the doors were just opening to customers, we burst in and secured a rental car.

We hurried back to Austin in just three hours, and my parents rotated in the driver’s seat to catch up on sleep. Every so often, we checked on Austin’s weather — it was looking promising.

We had booked a new 2 p.m. flight back home, and when we arrived at the airport, we had faith in our plan. Austin had a much calmer group of travelers, not distressed by the cancelations and delays in Dallas.

At last, our plane arrived. To say that we were relieved is an understatement. After a night of chaos, we finally boarded our flight and returned to the comfort of our home.

Of course, we hadn’t planned for all these setbacks. Still, reflecting back, I’m glad that it happened. I’ve gained a newfound appreciation for what I call home, and plus — I know exactly what to do the next time I’m stranded at the airport.