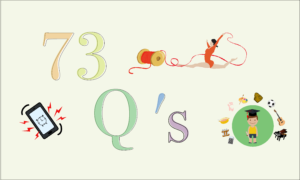 Permalink
The Falcon interviewed a number of students and teachers on campus to formulate this Vogue-inspired story.

“I once told a bunch of kindergarteners and first graders that July 4th was on September 16th,” sophomore Adeena Kadire said.

“(Not at SHS) A student came in with weed stuffed in their pocket. It was still burning,” English teacher Megan Laws said.

“It’d be ‘Numb Little Bug’ by Em Beihold. I even changed one of my passwords to be ‘a little bit tired of life’ because I felt like that’s where I’m at right now,” junior Maithili Kulkarni said.

“‘The Bean Trees’ because no one would read me,” sophomore Esabella Fung said.

“Sure, why not,” junior Stanley Yang said.

“Torrens! He has a happy positive can-do attitude and helps whenever he can,” freshman Aneri Shah said.

“Once in fifth grade I got a 53% on a math test and I told my mom I accidentally flushed it down the toilet but in reality, I hid it behind the couch so one day she was cleaning the couch and found it,” senior Nicole Lu said.

“Find my family and just sit there and cry together,” junior Maithili Kulkarni said.

“My favorite thing about myself is that I am very creative,” English teacher Megan Laws said. “I’m constantly trying to come up with creative ways to teach or do something. I’m never stuck in a rut.”

“A picture of inside of Mr. Bayonas classroom as he is secretly gaming some dota 2 and streaming it on twitch,” sophomore Priyanka Meduri said.

“[Freshman] Steven Hse said don’t do drugs because it costs too much,” freshman Annabelle Miin said.

“My senior year of high school, my parents sent me to Costa Rica by myself,” English teacher Megan Laws said. “The living situation was so different there, and I got to build part of the plumbing system. Right before the pandemic, I took my husband there and we saw how much everything has changed.”

“Don’t worry so much about the future,” English teacher Megan Laws said. “Just live in the now.”

“Where I am now, after fending for myself without my parents’ support in college,” English teacher Megan Laws said.

“The experiences I’ve had teaching and traveling to places have really impacted who I’ve become,” English teacher Megan Laws said. “Of course, the people along the way that I’ve met have also influenced me, but I think having these new perspectives and different learning experiences have impacted me the most.”

Junior Maithili Kulkarni identified her biggest regret as “not trying more things when [she] was younger.” With orchestra, which she joined in fourth grade, being her only extracurricular she’s stayed with since childhood — she plays the viola — she wishes she had learned more sports, music or languages.

“Now everybody in high school is so good at things, but they started when they were like 5 years old,” Kulkarni said. “When I was 5, I should have tried more things, and maybe if I liked something, I would have kept more hobbies until now.”

This is a regret she has felt since elementary school. Kulkarni recalls when her friend asked if she wanted to play soccer in fifth grade. Even then, because all her friends had started playing the sport when they were in first grade and were skilled, she felt “out of it” and thought it was too late to join the sport.

Although her mindset has now changed and she is willing to explore new hobbies despite a late start, new factors have posed difficulties. For example, she started learning guitar in September 2020, but has not had time to continue taking classes to maintain the hobby.

“I’ve been so busy that I had to stop the [guitar] lessons,” Kulkarni said. “It’s sad because it’s something you’d like to be doing that you can’t really give time to.”

Still, she sees college as another opportunity. Though grades will still matter, Kulkarni believes there will be more time for pursuing other activities.

“Once I get to college, I’m just going to do whatever I want,” Kulkarni said.

“That I had a good day,” freshman Maya Tian said.

Throughout childhood, junior Merriam Labban and English teacher Megan Laws were spellbound by their childhood dream professions. Since then, they have shown unwavering dedication towards achieving their goals.

As a second grader, junior Merriam Labban remembers showing off the first ever dress she had made to her parents. A short, simple pearly-gold dress studded with rhinestones and a V-Neck that hugged her body, Labban remembers this as the moment that kindled her interest in fashion design.

She would often look at clothing and decide that she wanted to tweak it in different ways to suit her taste. Her mother usually provided fabric, and a family friend generously gave her a sewing machine to use. She had initially tried hand sewing, but the sewing machine helped her tremendously.

This passion has continued to grow, and Labban plans to pursue a future career as a fashion designer. She dreams of becoming a big name in the fashion industry, like her role model Coco Chanel, a 20th century fashion designer known for popularizing a sporty, casual chic style for women after World War I. She hopes to attend NYU for business management, take a two year program for fashion design, gain experience through fashion internships and ultimately create her own company.

“I really enjoy the process of designing something and putting it together, and I like making it up as I go,” Labban said. “Nothing else fits what I want to do.”

Labban’s creative process begins with gaining inspiration. When she stumbles across an outfit that catches her eye, she proceeds to modify it to fit her style. Other times, she’s inspired by fashion designers like Chanel.

Labban’s style is “continuously changing,” with her current style being “hippie boho” — a style in which natural fabrics, retro patterns, neutrals and warm shades merge with a ‘70s aesthetic. To make clothing, Labban first sketches designs, then purchases materials at JOANN Fabrics. Most pieces take her a couple of hours to complete; however, some dresses, like the two she made for the benefit fashion show, take over a week.

For Labban, making dresses and other clothes is therapeutic.

“[Making clothes] keeps my mind busy with something and away from schoolwork,” Labban said.

English teacher Megan Laws has also stuck with her child dream profession: Laws has been interested in becoming a teacher since she was 3, but she also wanted to become an Olympic gymnast for most of her childhood.

Initially inspired by the “Magnificent Seven,” U.S. Olympic gymnasts who competed at the 1997 Games in Atlanta, Laws later discovered that becoming one required a level of work and dedication that few can match.

“Learning gymnastics as a little kid was quite easy as long as you had the strength and flexibility, which I did,” she said. “But then I learned that many professional gymnasts don’t actually go to school. That was the turning point for me because I didn’t want to miss out on the school experience — I liked having a teacher and seeing my friends.”

Laws never lost interest, though, continuing to practice and coach gymnastics at Kruz Kidz in Santa Cruz prior to the pandemic; however, she has since stopped gymnastics because she “doesn’t think her body can take it anymore.”

It wasn’t until her first semester of college that Laws decided to fully commit to teaching. She had originally majored in Kinesiology, but didn’t enjoy it because it required too much science and math. Kinesiology also didn’t require a four year degree, and Laws thought that studying it would be a waste of money. However, she greatly enjoyed editing her friends’ essays and ended up transferring to San Diego State University (SDSU) to study Modern Literature.

Laws later transferred to St. Mary’s College after finding the campus of SDSU too rambunctious. But the price tag proved too expensive for her since she was paying for it on her own, and so she eventually finished her degree at UCSC.

Despite the difficulties she has experienced, Laws said she is glad to be where she is today.

“I had lots of difficulties with my family in high school and they didn’t support me going to college, but I’m proud of myself for being able to push through those obstacles and get to where I’m working now in such an amazing area,” Laws said.

“Meeting all of you,” senior Dana Steinke said.

“I almost poisoned someone by giving them a crepe with borax disguised as powdered sugar,” freshman Sameera Kapur said.

“When I was young, I was super into ‘Full House,’” English teacher Meghan Laws said. “We had to watch one show each week, Thursday nights. We were always waiting for it, and I’d get very upset if I did not get to watch the show. It was a problem, and then I wasn’t allowed to watch TV during the week because I got upset.”

“The middle of the night when I’m awake and nobody else is and I’m either contemplating my reality or having a mental breakdown,” junior Maithili Kulkarni said.

According to Merriam-Webster, the term “pet peeves” refers to “a frequent subject of complaint.” From slow-walkers who crowd the halls to loud and obnoxious open-mouth chewing, many of us have pet peeves — it is indeed an inescapable part of the human condition.

“I get that leg-bouncing is an unconscious habit for many people, but it’s not so fun when you’re trying to take your [AP US History] final and your deskmate is shaking the whole table,” Yang said. “I was trying to focus, and suddenly my multiple-choice test was shaking like there was an earthquake, which was a major bother.”

Yang said another one of her pet peeves is the iPhone ringtone. Not only is it “anxiety-inducing,” but the noise brings Yang unpleasant memories because her parents used the alarm to signify “homework time” after dinner.

“Donate it to charity, invest the rest in my future business,” junior Merriam Labban said.

“I want to be cremated,” junior Melody Lin said.

“When I was in middle school, I really liked this boy and I was not allowed to date,” English teacher Megan Laws said. “We still wanted to date and go to the movies together, but I couldn’t tell my dad. So I went to the movies with my friends, and the boy was magically there. My mom was supposed to pick us up, but then at the last minute it changed and my dad picked us up. So he saw, and I got in big trouble and lost all technology privileges for a month.”

“Those little balls of hair that look like bugs when you can’t tell if they’re bugs or not unless you stick your face super close,” sophomore Gracie Sun said.

“A trip around the world,” junior Melody Lin said.