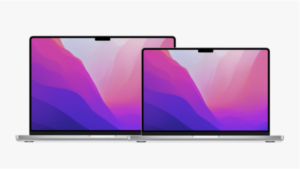 Apple’s laptops from last year revolutionized the market, introducing the new MacBook Pro and Air. With the addition of the M1 chip, a CPU designed and manufactured in-house, the 2020 MacBooks allowed all components to be well-integrated and optimized, boosting performance and efficiency to new heights while retaining a cheap price.

This year, with expectations sky-high, Apple came up big again, announcing a 14- and 16-inch MacBook Pro and two new Apple chips, the M1 Pro and M1 Max, during their annual keynote on Oct. 18.

Simply put, these laptops are incredible. The performance gains from the M1 Pro and M1 Max are exceptional compared to their competitors and even compared to last year’s models.

These chips are as the name suggests: last year’s M1 chip, but improved in all aspects. Compared to an 8-core PC CPU, Apple boasts 1.7 times increased performance while consuming 70% of the power.

The performance these chips boast is to the point where it’s almost impractical for a laptop to have so much processing power. With the highest-end M1 Max, users make use of 100% of the processing power in very few circumstances.

Last year’s model has already put down most Windows productivity laptops like the Dell XPS and Lenovo X1, which both generally cost more than the M1 MacBook and don’t perform as well.

Even as a daily Windows user, I’ve been seriously considering switching to a MacBook for college. The M1 MacBook from last year is powerful while being super power efficient with a battery life of around 16 hours of playback time, with a price of just above $1,000.

It’s not a coincidence that Apple, through low prices and high performance, now reigns supreme in the world of laptops. The company’s vertical integration strategy, wherein it manufactures most of all the components in its laptops, allows them to improve the performance at a rate competitors cannot keep up with. This strategy, yet to be effectively implemented by any other Windows laptop manufacturer, is revolutionizing the tech industry. The new MacBook Pro is more than just an incredible laptop — it’s a promise for what’s to come.