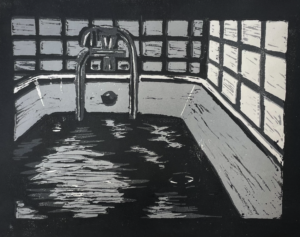 Permalink
Students are able to better understand the time and effort it takes to create Writing and Art pieces as 2022 Scholastic Writing and Arts Awards come out.

Each year thousands of students from across the nation submit entries to the Scholastic Writing and Art Awards and await the results.

Lin enjoyed participating in the Scholastic Writing and Art program since she believes that it is a great way for young artists and young writers to share their work. All of her submissions were inspired by a combination of her personal experiences and work done by other young artists and writers.

“[Budding Lotus] was inspired by this video essay I watched on YouTube about fetishization of women of color,” Lin said. “This poem is specifically about after the Vietnam War. There was this kind of stereotype created about Southeast Asian and East Asian women, called the ‘lotus blossom’ stereotype, which I wanted to bring attention to.”

The poem is written from the perspective of a woman, or “flower,” who questions why the color of her skin is the cause for unwanted attention from men.

Like “Budding Lotus,” Lin’s other poem, “to the america we gone to” was inspired by a recent experience she had while in an airport, where she saw Mexican Americans facing racial discrimination at the airport’s immigration. Inspired by this, she wrote her poem on how many immigrants, such as Lin’s own parents, tried but failed to “hold onto the attainable American Dream.”

Yee said the Scholastic Writing and Art awards have greatly increased her self-confidence in her art and herself.

“I first started competing in the Scholastic Art awards as a freshman, during which I ended up winning two Gold Keys,” Yee said. “It really brought up my confidence and encouraged me to continue art.”

Having done art for the majority of her life, Yee was able to create each of her paintings in less than a day. Yee’s first painting, “A Moth At Night,” features a man with a moth mask. Her second piece, “A Girl with a Mask,” is a self-portrait of her with a mask on her ear; the angle and position of the painting imitates that of the famous “Girl with a Pearl Earring” by Johannes Vermeer. Yee’s third painting, “6 Ghosts,” was a study piece (art created with a goal of learning a particular art concept) and gave her the opportunity to explore with materials such as cloth in order to create ghostly figures on her canvas.

“In general, there’s not a lot of recognition given to the number of hours we put into art pieces,” Yee said. “Winning these awards feels very fulfilling and reassuring of my passion.”