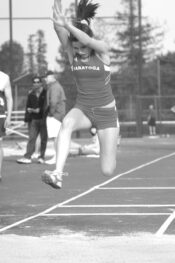 This year’s boys’ varsity tennis team has proved unstoppable. As of March 28, they remain undefeated.
Especially dominant have been the team’s singles players. In fact, No. 1 singles player John Lamble is leading the impressive squad with an impressive undefeated record and has not even dropped a set.
Lamble, who has been playing since he was 5 years old, is currently ranked 55th in the nation in the under 18’s division at only 15 years old. His consistent effort and work ethic are an inspiration to the team.