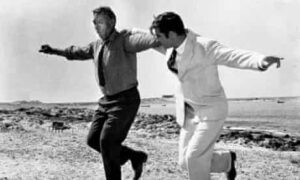 It’s 2:44 a.m. on a summer night, and the house is asleep. Instead of sleeping, I’m sitting straight up in my bed, sweating, listening to the silence, feeling the growing urge to snatch the car keys and barrel down an empty freeway at illegal speeds. Or cook and eat three bowls of disrespectfully cheesy pasta before sunrise. Learn a new language. Swim in the ocean.

What’s the big deal with spontaneity, you might ask? I read Nikos Kazantzakis’ classic novel “Zorba the Greek” back in July. Written in 1946, it’s set in the 1910s and written from the perspective of a mundane unnamed narrator who runs into a character named Zorba ― a man who radiates passion and dances at the best and worst of times. Zorba feels like someone you’ve met before, someone who always feels right at home regardless of their circumstances.

The narrator quotes Confucius, who argues that “many seek happiness higher than man, and others beneath him, but happiness is the same height as man.” Some people pursue happiness through monetary or intellectual gain, while others work tirelessly in search of some ideal life to be achieved. I can’t speak for others, but I’ve always felt shackled to the expectations of other people, or even the subconscious thought that others are expecting something of me.

It is in this sense that Zorba is the most intriguing. He desires no object, nor does he wish to be seen a particular way. In a way, Zorba is entirely free, and with this freedom he dives right into all that surrounds him: singing, dancing, joking, laughing, eating and drinking.

Zorba is an example of a “thymos,” somebody who embraces their wild hedonistic side and is intoxicated on life itself. He embraces desires like reading at a park all day or feasting without regard for consequence. Any hesitancy is washed away by the beauty and understanding that what we have is all there is. This is the beauty of spontaneity.

Of course, his personality is a tad out of touch with the modern world. Unchecked impulses can be reckless and callous, and Zorba causes plenty of heartbreak and pain in the novel, spurning a courtesan hotel madame’s love and asserting that “man is a brute.” The narrator explains that in a more primitive world, Zorba would have been a chief of a tribe, a troubadour, someone whose every word was hung on. In our callous modern society, a Zorba wanders hungrily, his free-spiritedness irrational.

Zorba is nothing like a role model in a society that values contribution and productivity. In living like him, one risks going mad. But there is a difference between going mad and embracing a bit of madness every now and then — these can be some of the best moments of our lives. I think back on sudden outings with new friends, nonsensical dares like jumping into the harbor in Helsinki, borne out of a newfound courage at experiencing the beauty of living.

Moments where you put madness above your fears or social customs will take some form of courage. To “go mad” is to let go of your ego and embrace the rhythm of existence. Of course, we can look stupid and experience the sting of defeat or rejection when strive to follow our heart’s desire. As the narrator argues, “Every man has his folly, but the greatest folly of all … is not to have one.”

Zorba embraces madness because he sees it as the only way to live in full consciousness of death. If we knew we were to die in days, we would surely do things that make us look absolutely insane: confessing love frantically, shedding responsibility, indulging in music or meals or laughter. Zorba lives this way constantly, regardless of whether he dies or not, and in the face of death, madness looks increasingly lucid.

Of course, Zorba’s instructions to “live life and enjoy it” are a little too simple for such a complex world, but giving into some madness from time to time — our inner Zorba — might just lead to less regret at the end of our lives.