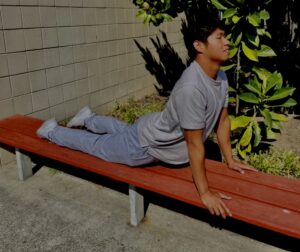 Photo by Mitchell Chen
Posing in an upward dog position, I take in deep breaths to clear my mind.

Permalink
After a week of yoga, I found no changes in my mood whatsoever: It was a waste of time and I would only recommend it for people who want to fake their exercise routine.

My view of yoga is that it is probably the most overhyped exercise ever. I mean it’s cool to be able to do splits and breathe deeply, but can you bench 225-pounds? Now that’s cool.

Even though I’m a certified yoga doubter, I forced myself to do half an hour of it every day for a week as an experiment. I found my results to be disappointing, but for others the results may vary.

With a ten minute beginner yoga tutorial I found on the YouTube channel “Yoga with Adriene,” I sat on my bedroom floor and did yoga every night before bed. This was apparently supposed to relieve stress and anxiety, but in the end, Adriene’s yoga didn’t fool me.

Here’s a recap of how my yoga-week went:

On Monday, I woke up refreshed and looking forward to doing yoga. I sat in the middle of my room and followed along with Adriene, my virtual yoga instructor. Doing butt exercises with a “breathe in” and “breathe out” chant was definitely not what I had in mind when I said I wanted to try yoga. I thought yoga was going to unlock some new powers like super speed or super strength, but instead, the noisy instructions telling me to breathe became annoying. I felt belittled — I didn’t need someone telling me to breathe air.

I was less stoked about Tuesday’s yoga session, but being a trooper, I got on my musty yoga mat and clicked play on the new video “Good Flow yoga.” This session of stretching like a cat felt really nice for my lower back after benching 225 pounds.

On Wednesday, I decided to celebrate getting a good score on my math test with “Yoga for Celebrating.” This yoga session got 300,000 views but unfortunately did not live up to the hype. It was as slow and boring as always.

I checked out one of Adriene’s Spanish videos on Thursday since I’ve always wanted to get better at Spanish. It was quite confusing, especially because it was a Spanish voice-over to a video where she was originally speaking English. It was hard to follow and I did not understand a single word of what she said, but I found her voice to be quite soothing and melodic. I decided to follow along to her “Yoga con Adriene en Español” channel moving forward.

On Friday — my last day of the experiment — I followed a longer session to really stretch myself out and find what Adriene calls my “inner aura.” I took deep breaths and stuck my butt high in the air in an attempt to do a picture perfect Downward Dog pose. As with all my other yoga poses, I think I nailed it (but probably didn’t).

Based on my brief experience with it, I would recommend yoga for those who are bored at home and want to do an activity that will impress your peers and parents. And while yoga is definitely healthier than breaking your back deadlifting 405-pound bars, it did not satisfy my need for the intense physical exercise I associate with going to the gym. Namaste.