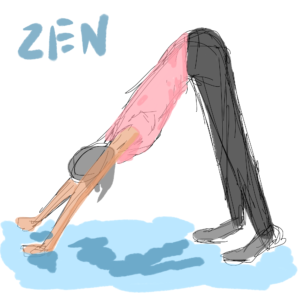 Exhausted and stressed from the week, many students have spent time on Wednesday afternoons to getting a bite to eat or catching up on their favorite show. The members of the Yoga for All club, however, log onto Zoom for their weekly meeting that features a variety of ways to cope with stress, including yoga and breathing techniques.

The Sudarshan Kriya Yoga (SKY) curriculum that the club adopted comes from an organization called SKY schools, which teaches breathing techniques and trains and certifies learners with official licenses. The SKY school and its parent organization Art of Living promote general wellness and has developed SKY breathing, a powerful yet simple technique that focuses on harmonizing the body’s emotions and breath.

Currently, club adviser Marina Barnes and health teacher Liz Alves are training with SKY school, and Alves plans to incorporate the SKY breathing into the Health class curriculum for next year; the plan is aimed at teaching freshmen so that they can have the skills for their entire high school journey. Their training includes teaching life values along with breathing techniques, allowing students to incorporate breathing techniques into their daily life. For example, groups led by a SKY-certified trainer might discuss values they would like to embody in daily life, and use breathing techniques to empower themselves to embody those values and overcome anxiety that prevents them from acting how they would like to.

The club meets every Wednesday at 2:30 p.m. to perform yoga and SKY breathing, followed by a closing meditation or guided breathing practice. Sophomore vice president Druthi Palle leads the yoga exercises, while Sekharan leads the breathing and meditation.

Palle has been doing yoga for the last five years and wanted to create a club primarily focused on yoga. Barnes brought Palle and Sekharan, who specializes in SKY breathing, together to combine the two ideas into one club.

Sekharan added that she has been trying to bring SKY school to SHS since her sophomore year, but due to financial issues, she decided to send teachers to go get trained themselves, and then have them come back and try to incorporate what they learned into the curriculum.

In addition to financial issues that need to be overcome, there are logistical issues to be addressed before SKY can be implemented into the school curriculum. Sekharan is working with assistant principal Kerry Mohnike to bring the curriculum to the school, but concrete agreements are still in the works.

In the future, Palle and Sekharan hope Alves and Barnes can teach more staff members about SKY school as it is expensive to send other teachers to participate in the program.

Ultimately, the club hopes that all students can benefit from the club’s yoga and breathing exercises.

“Even though yoga and breathing might not seem like something that could immediately cure stress, it really has helped me, and you really don’t know until you’ve tried something new,” Palle said.