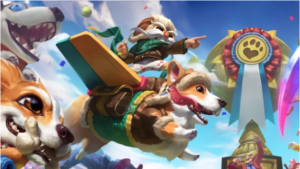 Corgi Corki, an April Fools cosmetic for the character Corki in which he rides on a dog.

It’s midnight: I flip my physics textbook open to a random page and, just as quickly, snap it shut. Instead of studying, though, I jump onto my computer and start a match of “League of Legends,” because that English paper might write itself if I wish hard enough and the homework fairy might appear to help me out with my physics homework.

I’m honestly not sure what exactly fuels my addiction to a game. I enjoy playing just half of the time — well, maybe half might be a bit ambitious. Maybe a third? But despite my brief obsessions with other games through the years (“Stardew Valley,” “Terraria,” “The Sims,” “Valorant”), I always seem to end up back playing League.

The main objective of every League game is to march down to destroy the enemy Nexus (a large magical crystal) by taking down defensive turrets, capturing secondary objectives for boosts and slaying members of the enemy team. The main issue with the game stems from each match having nine other players — the game has two teams of five on both sides. And though interacting with others adds to the entertainment value of the game, I’ve often noticed that people online are often not very nice. Bummer.

I still enjoy playing the game, though, sometimes. Maybe it’s just that there’s something pleasant in twerking my currently most-played character’s wriggling happy corgi butt shamelessly at my enemies’ corpses, or spamming taunts, laughs and emotes regardless of how badly I misplayed. (Sending a happy emote after losing is the core of zen!)

There’s also the friends I’ve made through playing League, usually bonding over silly plays or laughing at attempted insults from an enraged teammate or enemy. Although most of them fade into the obscurity of my in-game friends list, there are a few I still actively play and voice call with — people from different places and walks of life.

I’ve played League for around four years, and I’ve had a lot of interesting experiences along the way — some were even fun. It’s hard to reflect back on how much time I’ve spent on this time that could have been used more productively and say for sure it was worth it, but at the very least I’ve enjoyed it.

And, for now, my hard-earned addiction still has an iron grip on me.