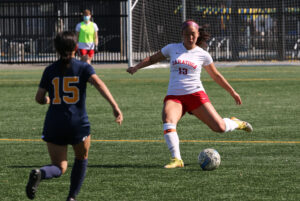 Senior Michelle Lim passes the ball to a teammate in a game against Milpitas on April 14. The team ended up winning 2-0.

In the summer of 2019, senior Michelle Lim sprinted 50 yards down a soccer field, her cleats digging into the field as she exerted all the energy she had. She was running to catch up with a forward from an opposing Spanish soccer team, who had the ball and was about to score.

“I never thought I was going to catch up to him,” Lim said. “But I was one step behind him and I slide-tackled him. It was one of the more memorable games I’ve played in.”

The game was just one event in her team’s 10-day visit to Spain, where her team — San Jose Earthquakes DA — played against international boys’ teams instead of same-gender girls’ teams.

These types of games are one of many practices and competitions high schools athletes attend to improve as players in hopes of getting recruited.

The recruitment process, however, was complicated by the pandemic. Athletes usually invite colleges to watch them play at showcases, but all of these events were cancelled. Many colleges also cut sports programs.

Lim first started playing soccer as a young child. She remembers being “pretty terrible” at first, but she loved playing the sport. Her parents pushed her to continue with soccer and it eventually became her passion.

Initially, Lim was fielding recruitment offers from many colleges, but due to the pandemic and an NCAA ruling allowing college seniors to play another year, many of the colleges stopped their recruitment process.

Lim said she was interested in a college that would foster both her academic and athletic aspirations. She found Wellesley to be a good fit because of its rigorous academic program and extensive network of students and alumni.

Lim said she knows multiple people on the Wellesley team and has talked to them about the school. Her familiarity with the team was a plus.

“My Wellesley coach was probably the coach that I talked to most frequently throughout quarantine,” Lim said. “Interestingly enough, she has actually never seen me play in person and recruited me solely off of video and by talking to my coaches.”

Lim is one of several seniors committed to play collegiate sports. Jason Chin, who fences, committed to UC San Diego for Division I fencing in August 2020.

Chin has been fencing for around six years. He said he used to play soccer and tennis, but started fencing after noticing his younger brother Julian, now a freshman, competing and making friends.

After trying the sport, he realized he enjoyed it and began training with his brother. He eventually graduated to international competitions like the Cercle des Escrimeur Parisiens (CEP) Marathon in Paris.

The CEP Marathon is two days long, unlike most fencing competitions that only last one day — hence the name marathon. Because of this, Chin said, he got to meet more fencers and compete more than he usually does at competitions.

“I’ve met some of my closest friends at that tournament,” Chin said. “And I did pretty well at it too.”

Chin accepted a partial scholarship offer to attend UCSD. He said he also considered Brown University and NYU, but the former cut its varsity fencing program and the latter’s coach decided not to offer him a spot.

Chin has been on the UCSD campus numerous times, always coming away impressed.

“It’s not too far from home, but it’s not too close either, so it’s like that sweet spot in the middle,” Chin said.

Chin said he hopes the program helps him improve as a fencer and climb the national rankings.

“The wildest dream is to go to the Olympics,” Chin said with a laugh. “But I’m hoping to make the NCAA championships and get an All-American. I want to be able to rise to the top 30s in the U.S. fencing community once in my career.”