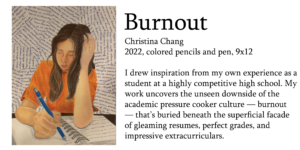 Photo by Christina Chang
Many submissions revolved around the theme of mental health. Among them was senior Christina Chang’s artwork “Burnout,” a mixed media self portrait which comments on the academic culture at Saratoga High.

Chatter filled Soundings Art and Literary Magazine adviser Amy Keys’s classroom as the staff voted on submissions for publication on Jan. 12. A Peardeck slideshow containing artworks and their respective titles was projected on the whiteboard at the front of the classroom. Approximately 30 staff members voted “yes,” “no” or “abstain” for each submission.

“We set up a slideshow and had conversations about each piece,” said senior Anastasia Panidis, an editor-in-chief of the magazine. “It’s really hard to let go of pieces because everyone is so talented.”

Soundings is set to release their winter issue on Jan. 31 through its official website, saratogasoundings.com. Twenty-three of 35 writing submissions and 15 of 35 art submissions will be published in the winter issue.

All submissions were given feedback on their works in early December. Writers and artists had roughly two weeks to make suggested edits.

“Our role as a school magazine is to serve as a forum for student expression and encourage students to produce art and literature,” senior editor-in-chief Christina Chang said. “Aside from showcasing exemplary works, we really wanted to make submitting to Soundings a learning opportunity by having both a submissions editor and team member provide critiques for each submission.”

The writing pieces consist of poetry, short stories and memoirs. However, writers are encouraged to submit whatever creative writing pieces they want. Artworks ranged from photography to digital and traditional art.

“A lot [of the art pieces] either express emotions students are going through or their technical skills in photography of a mountainside, for example,” Panidis said.

While there are plenty of submissions, the budget to fund Soundings is tight this year. Before the pandemic, Soundings was funded by profits coming from yearbook sales, which have been decreasing in the past three years,  Keys said.

The staff also hopes for a quality upgrade of shiny, glossy paper, in contrast to last spring’s paper issue, which was made out of printer paper. However, this upgrade will cost double the price.

Last year, a one-time grant from the PTSO funded the printing for the spring issue. Even though PTSO normally looks away from offering grants to consumable organizations, they have once again granted Soundings $500 for the upcoming spring issue and website costs. While the donation is a good start, they will need “lots more than $500 [roughly $3,000] for the print version,” said. Keys. Hence, Soundings will look to more income from donations and fundraisers.

Soundings plans to set up an exhibition in the library on March 3. Different art and writing pieces will be showcased, accompanied by a poetry reading and a jazz performance. In addition, they will ask for donations at the door and award the top donors with the title of bronze, silver, gold and platinum on a dedicated page in the Soundings spring magazine.

“People can pay to walk in, look around, listen to poetry, readings and jazz,” Panidis said. “Hopefully that’s going to raise a little bit of money for us to print.”