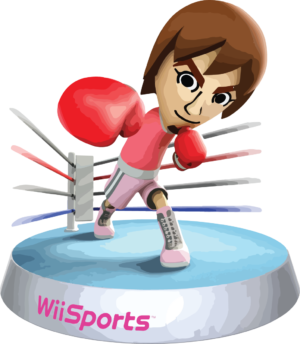 For the past three months, my daily routine has just been to wake up, go to school, do homework, watch TV and sleep. In other words, I haven’t exercised or barely even stepped outside of the house. However, since there was recently a four-day weekend, I decided to have fun playing an old game that I loved: Wii Sports. Since the game requires you to move around, I was sure that it would be a great way to get some exercise.

When I was younger, Wii Sports would be my go-to party game whenever we had guests over, especially when my parents would invite their friends who had children that I didn’t know. Playing Wii Sports with them would allow us to still have fun without being awkward.

Unfortunately, just setting up the Wii to play took hours. Since I haven’t touched the game in years, I had to find the console, controller and new batteries. After finally dusting everything off and plugging the console into the TV, I was ready to play.

A wave of nostalgia hit me as the Wii theme song played — it was time to regain my once-legendary athletic prowess. First, I started off by making a Mii, and I tried to make it look like me but it sadly ended up resembling my mom. Either that or I look more like my mom than I would like to believe.

Finally, I was actually able to start playing. I remembered that my favorite games were tennis and boxing. I decided to try tennis first.

For tennis, I had to swing my arm that was holding the controller. At first, I was swinging my arm as if I was trying to hit a home run and it made my arm hurt a little. After losing my first match to the computer players because of my aimless arm swinging, I realized that if I flicked my wrist, it would be significantly easier to win. As my nonexistent tennis coach once said, technique is key.

I tried baseball and golf, but they were a little boring since they weren’t as fast-paced as tennis or boxing.

I saved boxing for last because I remembered that it was exhausting. I was hoping to fight Matt, supposedly the strongest Wii character and the only one I remembered from my good old days as a Wii Sports addict, but I sadly never encountered him. In boxing, my strategy was just to throw as many punches as I could in order to knock out the other player as fast as possible. Although this was pretty effective at knocking out my opponents, it was also effective at knocking out my arms as I had to constantly punch for 30 seconds to a minute at a time.

I was interested in how challenging it would be to play the boxing game a lot in one sitting, so I set a timer for five minutes and repeatedly played it. Every time I won, the next opponent would be a little harder, so it became that much more tiring after every round.

When the five minutes were up, I was already starting to sweat a little, and my upper arms felt pretty sore. I don’t know if this was because of my previous lack of exercise or because I was actually trying really hard.

If you want buff arms, Wii Sports boxing would honestly not be a bad alternative to sitting at your computer all day. But while it did get me back into working out and being more active, I would just stick to running and doing YouTube workouts.