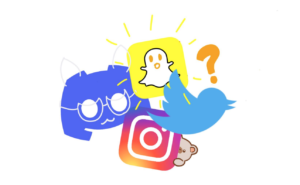 Permalink
Some have fallen and others have risen in recent years.

Instagram, Snapchat, Twitter, TikTok, Discord and more. With a seemingly endless variety of social media platforms to choose from, it’s become challenging to delineate the pros and cons of each. Here’s my take on which ones are worth having.

With no introduction needed, I think we all are far too familiar with Twitter’s controversial reputation, especially under the recent leadership of Elon Musk. Let’s just say that we won’t be using it for actual communication anymore. Twitter first began as an online microblogging service that distributed short messages, called “tweets,” for everyone to see. However, in the past few years, Twitter has slowly transitioned into a biased, misinformation-plagued news platform, overflowing with trending hashtags, retweets and threads, making it far too complicated and misleading for many teens.

Additionally, when Musk followed through with buying Twitter on Oct. 27, the platform took a turn for the worse. A recent proposition that Musk enforced despite user backlash is that verified Twitter users now have to pay $8 a month just to have that blue checkmark next to their name. This affected 400,000 blue tick mark accounts on Twitter, and his attempt at a money grab led to widespread fraud and spoofing. Nevertheless, Twitter may yet rebound and is popular because of its easy-to-use interface and quick updates on the latest news.

Perhaps the first thing that comes to mind when one hears Snapchat is the outright weird and comical filters the platform boasts. In the depths of quarantine, I downloaded the app out of pure boredom to explore the vast universe of snapchat filters. Some personal favorites include the classic doggy face, the greenscreen and all the funny face-distorting filters.

Perhaps another selling point, and definitely the most addicting part of Snapchat, is its “streaks” system. You and a friend have to continually send snaps to each other every day in order to maintain a “snapstreak,” a little fire sign that shows up next to your friend’s name. The streaks encourage users to utilize the app more frequently by providing a reason to log on daily. Does it actually give you anything? No. But Snapchat wouldn’t be Snapchat without an obnoxious train of emojis next to your friends’ names and the long sought-after fire sign.

Originally launched in mainland China, TikTok has seen a meteoric rise over the course of the pandemic. With a combination of silly, funny and downright weird videos in a never-ending swipe-up format, TikTok keeps users hooked for hours on end. An influx in popular TikTok creators like Charli D’Amelio, Khaby Lame and Addison Rae have only added to the app’s popularity. Around the world, nearly 3 billion people have downloaded TikTok as of August 2022, and it’s only getting more popular from there.

While most social media platforms center around flashy videos and pictures that feed on teenagers’ millisecond-long attention spans, Discord was popular among the online gaming community initially but then became more widespread while aiming to provide simple and practical online communication through “Discord servers.” In these servers, people can interact with friends, send urgent announcements and private messages to server members. Under a server, you can create a feature called “channels,” or chats geared toward specific topics that keep the app organized and easy to navigate. Because of that, it has been widely used as a group messaging service.

Arguably the pioneer of social media, Instagram, (back off Facebook), is best known for its aesthetic feeds, captivating stories and addicting reels. With over 2 billion monthly users, it certainly stands its ground as a popular platform.

Some critics have argued that Instagram has had a reoccurring safety and privacy issue, with the platform suffering several security breaches. Also, because of the open-sharing and free platform, a lot of teenagers have reported that Instagram takes a toll on their mental health. While the photo-based platform is great, it was also associated with high levels of anxiety, depression, bullying and FOMO (fear of missing out).

Still, Instagram is simple compared to rival social media platforms, with a clean user interface and engaging text. Plus, Instagram is well rounded, with great opportunities for influencers to share their brand and everyday users to post about their daily lives. Being able to get an inside scoop on your favorite celeb’s life or see what your friends are up to makes the app appealing to both teens and young adults.

Although all of these social media platforms have their respective strengths and weaknesses, from organization to add-ons, they all contribute toward connecting the online community in unique ways, from classic Instagram stories to iconic Snapchat filters and addictive TikTok videos.