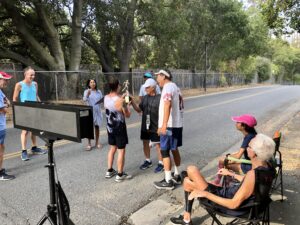 Permalink
Every Thursday and Saturday, retired cross country coach Danny Moon runs with a group of 20 to 30 runners at West Valley.

“Just keep those arms moving, and try to keep up with Hillary,” Danny Moon, 75, yelled to middle school runner Sophia Gonzalez on a recent Saturday morning. Sophia joined the West Valley Joggers and Strider (WVJS) club in July. She sprinted with d her older sister, sophomore Hillary Gonzalez, at the end of the track after finishing their last 800-meter tempo run. Around the two young runners were 35 other runners, mostly in their 60s and 70s.

At 7:45 a.m. on most Saturdays,, a group consisting of approximately 30 runners ranging from their early 40s to late 80s gathers at the West Valley College track for a twice-weekly group run.

The club was established at Westmont High School in 1966 by Carl Martin, Led Edhold and Bob Bonder. Edhold was a member of the Campbell Chamber of Commerce, a member-driven organization that promotes local businesses, and Bonder ran 50-kilometer-plus ultra races. All three participated in track events and marathons. As the club became more popular, it was formally organized as an Amateur Athletic Union (AAU) in 1970 and later as Club 117 under the USA Track & Field Certified Clubs.

Every year, WVJS hosts multiple races around the Bay Area, including the 5-kilometer Morgan Hill Freedom Fest race, held on the 4th of July, and longer runs like the National 10-mile Championships, held in April.

Since its establishment, the club has seen over 600 members and boasted some of the country’s fastest runners among its ranks. One former member was 1956 Olympian Don Bowden, the first American to run a sub 4-minute mile. Some have been running with the club for decades: Walt van Zant, 83, the president and fifth member of WVJS, is the current longest participating member at 53 years.

When Moon, the school’s former girls’ cross country coach, joined the club in 1980, almost 200 runners trained five days a week with the group. Currently, he is the club member with the second highest seniority at 42 years in the club; his wife, Madelyn Moon, is the third at 37 years.

Moon is now the unofficial leader and often handles the scheduling and timing of various runs. He has encouraged many of his past athletes from Saratoga High to join the runs.

“A lot of us are more mature now,” he said. “We’d like to see more of the younger folks.”

Hillary Gonzalez began running with the club in seventh grade, when she was in the middle school cross country team and was looking to get more into shape. She has found many benefits of training with older runners.

She finds that the weekend runs bring variety to her week and allow her to work on various aspects of her running such as sprints, long distance and trail running.

“The club is a lot more chill than running with a competitive team,” Gonzalez said. “Everyone in the club is very accepting and supportive, so no matter how I am running, they’ll always push me.”

In the 1980s, Tuesdays and Thursdays were primarily track workouts, while Wednesdays were focused on speed. Saturdays were reserved for courses and loops around Saratoga, while Sundays centered on long distances from around 9-11 miles. Now, the club focuses on training form and speed on Thursday mornings, hosting longer runs and relay races on Saturdays.

In the nearly 60 years since its founding, the club has formed traditions such as inventing unique races, giving nicknames for members and going to breakfast as a group after Saturday runs.

For example, every few months, the club hosts a handicap race, where members predict their times beforehand and are scheduled to start at different times, with the goal of finishing at the same time.

Every week during the Saturday run, the group also awards the Walt van Zant trophy to the runner with the best performance that week. Ironically, while the best performance runners typically score a personal record, Zant — who is also known as “Al Dictator” within the group — is also known for accrediting the term personal worst. Historically, the trophy was dedicated to a prominent member of the group, Dick Barrett, who passed away from a heart attack in the early 1980s. After years of wear, the Dick Barrett trophy had lost a hand, and WVJS members agreed to replace it in August with the new Walt van Zant trophy.

Despite the hard workouts on Thursdays and Saturdays, Moon said he always looks forward to eating breakfast with a group he considers as close as family.

“I love being around the people, and we get to reminisce how fast we all used to be during our heydays and share some of our most memorable moments throughout the years,” Moon said.

Currently, while not all show up to every run, the 100 active members are all from diverse cultural backgrounds. They come from countries as diverse as Russia, India, Ireland, Britain, China and Taiwan.

Norry McAllister, 65, former vice president of the Corporate Sales branch at Hewlett Packard, joined the club in 2003, a couple years after moving to the U.S. from Scotland. McAllister initially disliked exercise, especially running. However, a neighbor encouraged him to join the club, and he immediately saw an improvement in his pace through the weekly runs. His improvement encouraged him to keep running, and McAllister soon grew to enjoy the sport more.

In his first five years of club membership, he had already run 21 personal records.

McAllister tries to encourage others to join, hoping to expose them to the supportive team environment he has become so familiar with. He has grown with people who joined the club in their 20s and are now in their 60s, 70s or 80s.

“To get people to join a club, you need a nucleus of young people to attract younger people,” McAllister said. “That’s where new life comes from, so it can continue.”

For the past few decades, news of the club usually spread through word of mouth. In 2003, WVJS member Gary Waggoner — who consistently scores among the all-time top 20 in courses the club organizes on Saturdays with records like an 18-minute 5K — joined the club after fellow member Dave Norlander encouraged him to run with the team.

“I’ve formed great friendships here — they’re all great people,” Waggoner said. “I’ve also improved a lot, since everyone’s pretty serious about running. It’s really inspiring to run with these older fellas who may not be as fast as they once were, but held really impressive times in their primes.”

During one of his first runs with the group on the Triangle Run course — a 4.68-mile, mildly hilly run around Saratoga downtown — Waggoner recalls a “humbling experience”: While he was having trouble catching his breath, Waggoner remembers being surprised at how members Becki Kriege and Missy Sudan (both of whom have previously won the Racer of the Year title for women in the club) were hardly breathing when they passed him.

He also recalls a time when he stubbornly refused to follow McAllister’s directions on Short Six, the hardest, notoriously hilly and longest run in the club (despite its name) at 5.74 miles. Waggoner only realized he took a wrong turn 120 yards into the run and went back.

He said taking a wrong turn is just one example of being deprived of oxygen and not being able to think “as clearly as you could be” during hard runs.

Another WVJS member, Wei-Ti Liu, 72 — who also goes by Willy — immigrated here from China in 1974. After reading an article encouraging people to run in marathons, he felt inspired to start training for a marathon himself.

Liu has run a total of 12 marathons, including ones in Poland, San Diego, Sacramento, Chicago, New York, Iceland, the UK, London, Paris, Tokyo and Berlin.

Liu, who joined the WVJS club before his Paris marathon in 2018, found that the club’s early-morning runs motivated him to wake up and do something that would benefit his health. He continued running with the club even after he stopped racing. Currently in his 15th year of retirement, Liu also found that the club was something he could look forward to attending.

“It’s good to feel finished after a race,” Liu said. “You feel very happy, even if you’re really tired and exhausted.  But you immediately start planning for your next race and training, and it’s almost as if your life has an objective.”

This sentiment is a reflection of a gradual change in the club’s dynamics over the years, Moon said. While WVJS members used to be very “intense” during race season, he said that intensity has changed into a more “happy, humorous and fun” atmosphere.

“Anybody is welcome to run with us,” Moon said. “Being ‘fast’ is relative to each individual. We challenge each other all the time, and we always help each other and support each other.”