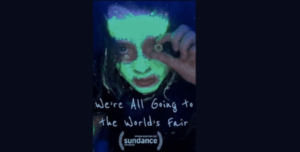 Photo by Courtesy of Wikipedia

Movie poster for “We’re All Going to the World’s Fair,” a finalist in Sundance’s “Next” session.

Director Jane Schoebrun gives the reader exclusive insight into the Sundance “Next” finalist film and the reporter shared her thoughts.

I sprang awake on Feb. 2 as my alarm clock rang, sprinting to my laptop and clicking open my screen. I logged into my virtual Sundance Film Festival account and checked the time.

I was among thousands of online attendees at the Sundance virtual Film Festival for the first time. The famed event is an annual film festival organized by the Sundance Institute that hosts the world premiere screenings of approximately 200 films. The event normally has an audience of 122,000 attendees.

Although my decision to purchase a ticket to the festival was spontaneous and didn’t consider all the ramifications (I ended up waking up at 5 a.m. every day to attend the Eastern Time virtual film screenings), it was one of the best decisions I’ve made in 2021.

One of the most memorable screenings I attended was “We’re All Going to the World’s Fair,” a finalist in Sundance’s “NEXT” category — described by the festival as “pure, bold works distinguished by an innovative, forward-thinking approach to story-telling.”

The film, directed and written by Jane Schoenrbun, chronicles the journey of a lonesome teenager, Casey, who becomes transfixed by the World’s Fair Challenge, an online dare-based game that promises to change the physical makeup of the players’ bodies.

The film intentionally blurs reality with online myth, never explicitly stating whether the promised physical changes are real or just a creepypasta (online horror genre) legend. Multiple players attest to experiencing physical changes: One player films herself supposedly turning into plastic, while another claims to be able to sprout tickets from their arms.

As an initiation into the World’s Fair Challenge, Casey records herself drawing blood from her finger and rubbing the blood onto the recording camera. Afterward, she turns off all the lights in her room and stares at a flashing computer screen for two minutes in the dark — another step in the challenge’s initiation abstract ritual that supposedly causes changes to start happening.

Although the initiation ritual might seem strange, it is one of many bizarre instances throughout the movie. In a film full of turns, the one thing viewers can rely on is its strange and borderline-grotesque imagery, cementing itself as a wayward, yet realistic, digital teenage nightmare.

Although it was shot before quarantine, the heart of the film is strikingly reminiscent of the teenage quarantine experience.

In the film, Casey is the epitome of an isolated teenager. She is never shown talking face to face with other people and the only characters she interacts with — and are given names — are Poe, her stuffed monkey and MJB, an online stranger she meets.

A standout scene occurs when Casey, seemingly on the cusp of attaining digital euphoria or “entering the fair,” tears off Poe’s eyes and limbs in a manic rage. It’s only when her screen dims that she realizes what she’s done and crawls around her room, collecting the twisted limbs and strewn cotton innards of the stuffed animal. She falls asleep, cradling the remains of the animal in her arms, rocking back and forth and whispering an apology to Poe.

The scene, among many other staggering ones, is hauntingly reflective of how many teenagers, including myself, lose our lonely selves to the delirium of the digital world.

Yet the rousing storyline isn’t the only thing that makes the film so intriguing. Living up to its seat in Sundance’s “NEXT” category, the film also experiments with different mediums of videography and storytelling.

As Casey slowly becomes more engrossed in the virtual challenge, the film’s cinematography also shifts to mirror the frenzy, switching from a reliable third perspective to grainy laptop photo booth recordings and iPhone vlogs that Casey takes of herself.

Curious about the film’s cinematic and storyline choices, I cold emailed Schoenbrun a week after the screening to ask a few questions.

Regarding the cinematic process, Schoebrun said they spent a lot of time thinking about the possible forms of the film, settling on a form of film even before they had a concrete vision for the plot and characters.

Schoenbrun, who uses they/she pronouns, said they chose to alternate between screen recordings and third person shots to allow for experimentation with unconventional film mediums, while maintaining cinematic flexibility.

“I had seen films that took place entirely inside a screen, and I really wanted to explore the lo-fi aesthetics of amateur online videos,” they said. “But I also didn't want to be limited to a found footage form exclusively, because it felt constricting in terms of what you could achieve cinematically.”

With regards to the niche nature of online dares and the creepypasta community, Schoenbrun said they didn’t “worry too much about making the film legible for audiences who aren't very online.”

“Making something that felt authentic was much more important to me,” they said. “I always hate it when movies go out of their way to hold people's hands and explain context to them.”

Schoenbrun said that storylines and expositions aside, the most important thing that they hope to convey is the underlying emotions of the character in the film.

“I hoped that even if people weren't experts on the creepypasta movement or YouTube aesthetics, they would still be able to find a way into the story and the world of the film through the emotions of the piece,” Schoenbrun said.

As a digital dare plebeian myself, I can testify to the success of Schoenbrun’s vision. Although the creepypasta theme played a large role in bringing in a sense of suspense and wonder to the film, mastery of movement is not required to appreciate and understand the film. At the heart of the film, the creepypasta components — and cinematographic choices — are all just negligible vessels for Casey’s internal journey with teenagehood loneliness.