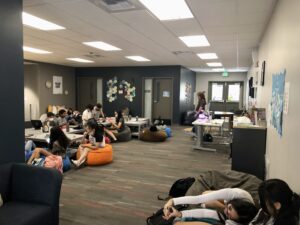 Ever since the Wellness Center was built at the heart of the school in rooms behind the Student Center in 2019, it has facilitated more convenient access to its mental health resources and provided a private, calming and supportive place for students.

This year, it’s seeking to provide even more resources to students who need help.

The wellness team on campus works with the school’s CASSY services, an agency that contracts mental health therapists for students. CASSY therapists are directed to the center’s lead therapist Shobha Vaidyanathan, who determines student-therapist pairings. Both CASSY and the center strive to protect and provide self-care strategies and mental health support.

This year, the center expanded its team, introduced more mental health resources and added youth outreach workers who work as a group to provide for students’ needs, aiming to destigmatize the process of reaching out for support. The center is also in the process of collecting more resources that address issues related to gender identity and racism.

Both Burke and Tan are therapists from CASSY. Vaidyanthan emphasizes that in the wellness center, there is no division between the CASSY therapists and district therapists, and they all work together as a whole to support students. If a student is in need of a therapist, Vaidyanthan assigns a therapist to the student depending on their personal needs.

According to Vaidyanathan, the center is also in the process of getting $14,000 to $25,000 meditation pods — quiet places equipped with special lighting and guided meditations. The Los Gatos High wellness center is equipped with one that was donated by a student’s family. New board games such as chess are also now available.

Vaidyanathan estimates that one-third of the SHS student population visited the center last year. She hopes the new additions will provide more ways for students to relax.

“Students in general take on a lot, and they don’t think self-care is important at all,” she said. “In Saratoga, there is a lot of stigma around mental health. It’s important for students to know that stress, peer pressure, depression, anxiety and panic attacks aren’t something to be ashamed of. The wellness center isn’t just therapy; it’s okay to just come, talk and relax.”

Vaidyanathan said she also regularly checks in with her team alongside Conley to figure out the personal concerns of specific students and issues regarding the stigma around mental health.

“I talk about self-care with my teammates. Even though there might be differences of opinion at times, that comes from a place of respect and not judgment,” Vaidyanathan said.

Vaidyanathan’s philosophy when working with students incorporates cognitive behavioral therapy, meaning she strongly believes that every student is different and their mental health needs must be approached on a larger spectrum.

Much of her philosophy is influenced by her experiences prior to working at the school. In the past, she has worked with teenagers going through mental challenges with domestic violence, addictions and eating disorders.

“It’s really been a mind-boggling experience to know that so many of our teens are going through these mental health [struggles] and need assistance,” Vaidyanathan said.

Working alongside Vaidyanathan is Conley, who was born and raised in Santa Clara, where she grew up in a large extended family that influenced her people-loving personality.

Conley previously worked at an education organization called Opportunity Youth Academy. There, she mentored high school students who dropped out of school, ultimately inspiring her to pursue her position as the wellness center coordinator at Saratoga.

She emphasizes how the Wellness Center acts as a calm place where students can take a break or relax.

“I see a lot of students kind of hesitant to come in here. They peek their heads in a little,” she said. “I just don’t want anybody to be afraid or feel like there’s some kind of stigma coming into the Wellness Center.”