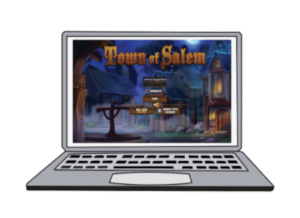 It’s the dead of night, and the small town of Salem is quiet. As a town lookout, you decide to randomly visit Player 1 and observe their home. You spot three other players also entering the house, but their roles, as well as the role of the player you are watching over, are unknown to you.

You jot down notes about the three players in your journal as they leave when suddenly, a thick, green banner flashes before you: “You were attacked, but someone fought off your attacker.”

The next morning, 12 of 15 players meet in the Salem square. The three others are dead. The first dead player is the bodyguard who saved your life. The second dead player is the mafioso who tried to kill you. The third dead player is Player 1, the same player whose home you observed the night before. Who was the murderer?

This is a typical scenario in Town of Salem (TOS), a social deduction game often described as an online, more sophisticated version of Mafia. With a list of 49 different roles such as investigator, doctor, mafioso and jester; eight modes to play like Classic, All Any, Chaos, Ranked and Town Traitor; and a user base numbering over 8 million, it’s one of the most underrated social deduction games out there.

In the most basic level, there are typically three factions: town, mafia and neutral. Fondly called “townies” in TOS jargon, town roles range from traditional jobs like doctors and sheriffs to more unique ones like jailors and transporters. Evil roles include the mafia, serial killers, executioners, and jesters.

Most games require exactly 15 players to play due to predefined role lists, although certain levels allow less. Players have a choice of creating their own game party with friends too, but the majority of ongoing games consist of 15 random people across the world at any given moment.

The game rotates from day to night, similar to a normal mafia game. During the daytime, townies bring forth evidence and lynch potentially evil candidates. At the same time, evil roles try to blend in, claiming town roles and posting their wills to push for incorrect lynches or prove their “innocence.”

When I first began playing TOS three years ago, it was a world of utter confusion, from the craziness of the chat to lynching to nighttime role actions. My very first game, when I was assigned the role of the mafia, was the saddest attempt in all of TOS history. I was acting so suspicious that I was lynched in an unanimous guilty vote by everyone, including my fellow mafia members.

After that experience, I was reluctant to play the game again. But as a 7th grader with nothing better to do at the library, I gave it another try.

Slowly, as I became more familiar with the game, I left the safety of the beginner Classic mode and tried out others like Ranked and All Any, which give more role options and more leeway for evil roles to trick the townspeople by not having a predefined role list. As I played more frequently, I became more experienced and each game became more fun.

Overtime, as TOS became my regular “go-to” game during stressful situations in lieu of TV or YouTube, I found myself becoming quicker in split-second decisions because in TOS, being one second too late often means that your team loses.

Additionally, the vast amount of logical thinking, scumreading and note-taking required to succeed as a town player helped me with other unrelated subjects such as math and linguistics puzzles. For example, in TOS, multiple players are claiming roles and throwing out evidence at different times, so a player must keep track of all the information at once. Similarly, linguistic puzzles I do for fun often involve keeping track of the symbols of a foreign language, a transliteration of that foreign language into the Roman script, and a direct translation in English.

I whole-heartedly recommend this game to anyone who wants to play a game without feeling guilty about wasting time. YouTubers like twopercentskimm and missmedi are skilled players and great resources to start from. That way, instead of spending hours scrolling mindlessly though TikTok, you can work to develop your logical reasoning skills on Town of Salem, all with the additional benefit of having a good time.