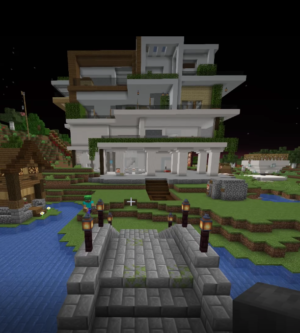 Being stuck at home all day makes it pretty hard to plan a special event, as many with birthdays over this shelter-in-place have discovered.

It’s a running quarantine joke that the best way to host socially distanced birthdays and graduations is over a game like Roblox and Minecraft, but 11 of my friends and I decided to actually make it a reality for one of our friends, Aidan Costello.

Our plan was to build him a mansion in Minecraft and throw a birthday party inside his new built house. Each person was to build a little something as a personal message to him so that everyone could contribute to the gift.

After we found a server to host our world on, we started building the mansion. In my time playing Minecraft, I was never a good architect. For this project, I had to dig deep and find inspiration to build something good.

I found myself gazing at buildings during walks and observing their architecture in order to gain inspiration, which helped me to some extent; ultimately, I found YouTube tutorials to be more helpful. Luckily, some of the members in the group did have experience with building, so they helped me plan out the design

After a few weeks, we finished construction, and I have to say, this could be considered to be my magnum opus of Minecraft architecture — which is not saying much, but I promise you, this mansion was the real deal.

As you enter the house, you enter a large living room, with a floor-to-ceiling window, sofas, shelves, and picture frames. Turning left would take you to the kitchen and dining room, where we were to have our party. Toward the back of the room was the kitchen island, built from smooth nether quartz, and closer to the kitchen door was the 12-seat dining table, where the cake was to be cut. Out the back of the first floor is the backyard, with a pool, springboard, water slide and tanning beds (which sadly don’t really help the horrendous skin tones of minecraft avatars).

The stairs in the living room take you to the second story, dedicated to the bedroom. Going down the main hallway and taking a right is where the master bedroom is, with a king-sized bed, walk-in closet and a bathroom with a full-on spa.

The third and fourth floor were where our gifts and wishes were. Since half of the people in our group had never played a video game before, it was a struggle walking them through what buttons to press and what blocks to use. Someone literally spent ages trying to make another cake, something that can be done with a few keyboard presses and one mouse click.

After persistent effort and lengthy Discord calls, we managed to get everyone to build him something, the gifts ranging from an aquarium to a Korean BBQ dining room, and a strange cobblestone structure called the “bob guy house.”

The night before the surprise, I found myself tossing and turning in bed. I didn’t expect to be so caught up over a silly birthday surprise. I was so excited to surprise my friend, but I was also anxious of all the things that could go wrong. What if the server crashes? What if half of the people don’t show up? Small things like these kept me up all night, but I would soon realize that they were nothing to worry about.

We had everyone involved join a Discord voice chat, while I inconspicuously gifted Aidan a Minecraft account and played some minigames with him.

Prior to the surprise, we had lightly poked at the fact that the group was playing on a survival world, and when the time came, I invited him to join our world.

Once he logged on, everyone joined the voice chat and surprised him. We ate some Minecraft cake, toured the virtual house and had fun.

After nearly a month of planning and hours of building, we had actually managed to pull it off. Aidan was at a loss of words at the surprise, and everyone had fun.

If you are having trouble coming up with an idea for a safely distanced birthday party, I highly recommend trying a Minecraft party. It takes lots of planning and dedication, but the outcome is something that can really make someone’s birthday.